Expertise in surgery and medicine

Get pleasure from the couple (succeeded).

The Unnamed Doctor is the main villain from the 2009 Japanese horror-gore movie known as Grotesque.

He was portrayed by Shigeo Ōsako.

The doctor appears to be a professional medical worker, he has a decent taste, liking general classic music, he likes wine and expensive clothes. He mentions in the movie that he is pretty wealthy, implementing that he might be a reputable surgeon, not fully a sadist, primarily looking for a extreme way of getting satisfaction since he has a very lonely-life. According to the couple, the doctor has a rotting smell, with a elegant appearance. It is also revealed that his mother was a hooker, and that he has her genes, showing off that he is a loner & angry towards humans because of her mother's actions.

A young couple Aki and Kazuo are seen walking down the streets on their first date, until the doctor went behind of them, smacking them with a hammer, driving them to a basement. In the basement, the doctor starts torturing and degrading the couple. Kazuo gets punctured inside of his belly by the doctor with a screwdriver and his tongue was also removed, and even Kazuo's scrotum got nailed three times. While the girl has been sexually assaulted multiple, forcing each other to stare at their sufferings. The doctor stops torturing them multiple times, and gives them medicine in order to keep them alive, to torture them more. Doctor ends up cutting all of their fingers, making collars out of them, pops Kazuo's right eye, cuts the girls nipples and her right arm.

The doctor explains that he is doing all of this madness just for his own pleasure, which escalates in castrating Kazuo, explaining that he finally pleased him self, and that he isn't needing their service anymore. The couple gets redirected to a hospital room, where the doctor is taking professionally care of their health. After some times of healing them, the doctor goes on to explain them that he will let them go, and that he will report himself to the police & that they will get millions because they managed to pleasure his desires.

However, the doctor explains that the will have to do a final test in order for them to be free, He ends up pulling Kazuo's intestines and attaches the intestines on a hook. Kazuo must cross the room to another side with siroccos and cut Aki's ropes in order to release her, both of them will be finally free. Though, Kazuo falls to manage to let Aki free, dying from blood loss. Aki then ends up insulting the doctor, telling his depressing life, which angers the doctor, and cuts her head off. The head lands on doctors neck, she bites into his neck with her final breaths. Kazuo still wasn't dead, he stabs the doctor into his foot with scissors. The couple dies next to each other. Doctor is seen burying them together in the woods, with all of his victims. The movie ends with the doctor goes to chase his next victim, being a girl walking by. 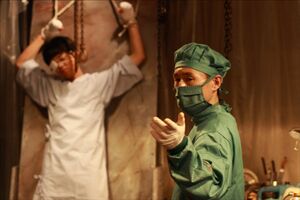 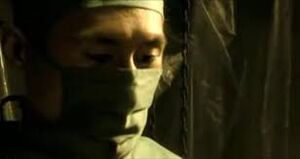 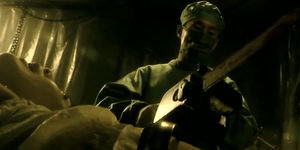 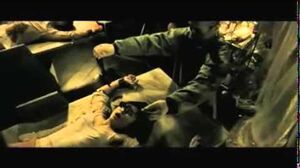 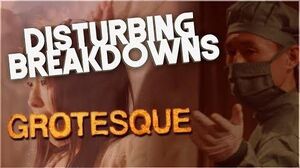