Predator
The Unnamed Gray Cat is one of the antagonists in Stuart Little. He is one of Smokey's henchmen and the only one that does not speak or referred to by name.

The Unnamed Gray Cat is a deep gray-colored long-haired cat with yellow eyes and a black nose.

The Unnamed Gray Cat was first seen during the roadster chase scene where he joins Lucky, Red, and Smokey in the chase but they failed to get Stuart as he was going back to his home.

He was later seen again with Monty, Red, Smokey and Lucky and was seeing Stuart and Snowbell and then when Snowbell was almost breaking the branch he was standing with Red, Monty and Lucky and then the branch broke and all 4 of them were defeated by Snowball and ended up falling into the water. The Unnamed Gray Cat was the second to emerge out of the water all wet after he, Red, Lucky, and Monty got defeated.

Like the other alley cats, the Unnamed Gray Cat is snarky and evil. Not much is known about him, as he never speaks or is referred to by name. Though he never speaks, his intentions are clear. 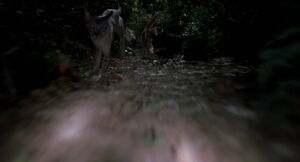 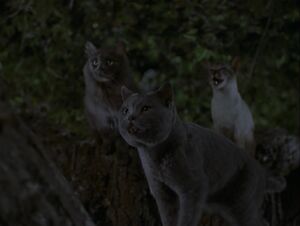 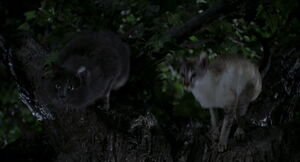 Lucky and Unnamed Gray Cat about to jump to another branch