The Witcher 3: Blood and Wine

Ancient higher vampire, leader of the vampires in Toussaint

Enjoying the impressions coming through the sealed gate.

Returning home to his own world.

Vampire
The Unseen Elder is a villainous character in the Witcher 3 expansion Blood and Wine.

He is an ancient and extremely powerful higher vampire. He lives in a cave near Toussaint where he guards the sealed gate between this world and the one where the vampires came from. Among the vampire in community, he acts as a leader and each vampire has to answer his summoning. However, opposed to other Unseen Elders, this particular one seems to be injured, as if each words he speaks hurts him. He prefers silence and solitude and vampires like Orianna and Regis only visit him if they do not have another choice.

After Dettlaff has unleashed a vampire horde upon the city Beauclair, Regis and Geralt attempt to stop him. As they have no way to find him, they have to find an alternative. Regis mentions that each vampire, including Dettlaff, has to follow the call of the Unseen Elder but considers this suicide. Anyhow, he reveals that he has no idea where the Elder is located.

Should Geralt decide to follow this path, he meets with Orianna who eventually reveals the location of the Elder's cave to him. She hands him a stone to open the hidden door. Geralt and Regis enter the cave where they see the Elder hanging on the cave's ceiling. Regis attempts to talk to the vampire but the Elder immediately freezes him in some kind of trance. Geralt then (depending on the player's choice) attempts to threaten or to reason with the Elder but the Elder swoops down on him, defeats him with ease, bites him in the neck - severely wounding Geralt - and throws him down an abyss into a lower part of the cave. Geralt only survives due to his slow metabolism. Venturing through the cave, Geralt finds another of the Elder's victims who did not survive the fall. At the corpse, he finds a letter and a stone. The letter claims that, if the stone is offered to the elder while a certain phrase is spoken, there might be a slight chance that the Elder will listen.

Heading back into the main cave, Geralt performs the ritual and offers the stone, which the Elder takes. He does not attack Geralt, who realizes that he is allowed to speak. The player has the oppurtunity to ask two questions, one of which the Elder will answer. On one of these questions, the Elder explains that the cave houses the sealed door back to the vampire world. The other question details the spell the Elder used on Regis to freeze him. After he has answered one of these questions, the Elder tells Geralt to state his business and not waste his time with more questions. Should the player choose to ask another question, the Elder will swoop down once more, this time slicing Geralt's throat and killing him.

When Geralt explains that Dettlaff is attacking the city and that they need to stop him, the Elder asks why this should bother him. Geralt explains that if he cannot stop Dettlaff, the people of Beauclair will form a mob and eventually overpower Dettlaff with their sheer numbers. Geralt furthermore claims that the citizens then will start vampire hunts and eventually find the cave of the Elder. Geralt states that the Elder will of course slay them all with ease but tells the vampire that more and more people, even mages from far away, will come to kill the Elder, thus robbing him of his peaceful solitude. The Elder accepts Geralt's proposal and agrees to summon Dettlaff to Tesham Mutna. He also releases Regis and then orders the two to leave his cave.

Ouside, Regis explains to Geralt that the Conjunction of the Spheres, which brought the monsters into Geralt's world, was far worse for the monsters than for the humans, as they were so few of them. Regis explains that vampires were either forced to adapt of to hide, using the Elder as an example for the latter. He also explains that the Elder is remaining in the cave due to the sealed door. As no door is ever sealed completely, there are sometimes scents, odors or dusts coming through from their world which are comforting the Elder.

True to his word, the Elder later summons Dettlaff to Tesham Mutna. 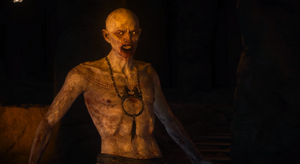 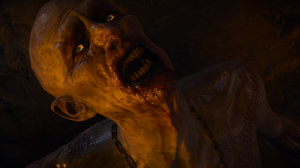 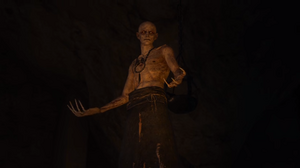 The Elder listens to Geralt's plan 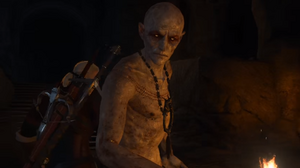 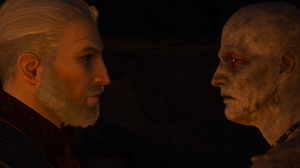 Geralt bargains with the Elder 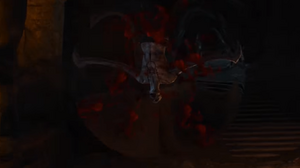 The Elder summons Dettlaff
Add a photo to this gallery

Retrieved from "https://villains.fandom.com/wiki/Unseen_Elder?oldid=3881944"
Community content is available under CC-BY-SA unless otherwise noted.