Uragami (浦上, lit. Urakami) is a major antagonist in Parasyte. He is a human serial killer and cannibal who has the ability to see if someone is a human or a parasyte. He has brought in by the military to help them in their operation to exterminate the parasytes in East Fukuyama City, but escapes when the military unit is slaughtered by Gotou. He returns at the end of the series and attempts to kill Shinichi and Satomi.

He was voiced by Hiroyuki Yoshino in Japanese and Andrew Love in English.

Uragami is a serial killer that is known for being a cannibal. Uragami is an evil egoistical and arrogant man that enjoys murdering innocent civilians for his own sick and twisted pleasures. Like Kana Kimishima he has the rare psychic ability to sense Parasites and he has an interest in Shinichi and the other parasites.

The police want to hide the existence of the parasites so they blame claim people murdered by the parasite were killed by the cannibalistic serial killer referring to the killings by Uragami.

Uragami is one of the new normal humans that are aware of the existence of the parasite pandemic, and he is also aware of Shinichi being part Parasite. 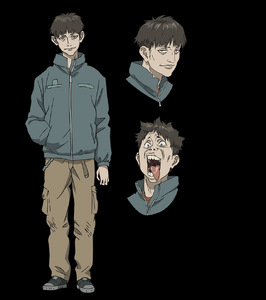 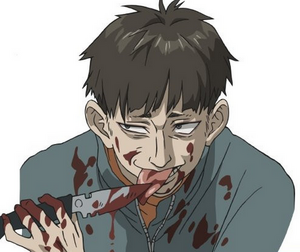 Add a photo to this gallery
Retrieved from "https://villains.fandom.com/wiki/Uragami?oldid=4151614"
Community content is available under CC-BY-SA unless otherwise noted.