Urameshiya is a ghost appearing in the Kirby: Right Back At Ya! episode "Escargoon Squad".

Urameshiya first appears where he haunts Castle Dedede, scaring everyone he can (but mainly focuses on King Dedede). This grim presence is actually there to scare (and eventually even gaslight) him stiff so he can pay his bills. No one knew it was one of Nightmare's monsters until the end of the episode "Escargoon Squad". Escargoon first spotted this specter standing beside Dedede on a picture that he took of him standing in front of the night sky. Scared sick, Escargoon tells Dedede that the ghost must have a grudge against him. Dedede disagrees and flings the picture away. However, he soon asks Mabel to make sure he's in the clear with the spirit (Mabel of course, also predicts that the ghost has a grudge against him). The ghost appears to haunt other characters like Sir Ebrum and Lady Like as well. Near the end of the episode, Escargoon bribes Kirby, Tuff, and Fololo & Falala to dress up as ghosts and scare Dedede. When Dedede (who fainted from fear) hears him admit this he chases everyone around the castle. When Urameshiya floats towards Dedede during the chase, he thinks it's just Kirby. When he passes through Dedede though, he realizes that it was a real ghost. Urameshiya terrorizes Dedede and chases him throughout the castle (and right towards his safe) telling him to pay his bills. The ghost floats away to the monster transporter with money bags in hand.

Urameshiya is an almost fully transparent ghost with a flat, oval shaped head and a long, wispy tail. His head is a very pale cream color and the rest of his body is a very light gray. He speaks with an eerie tone in the original, but in the dub his voice is very childish. 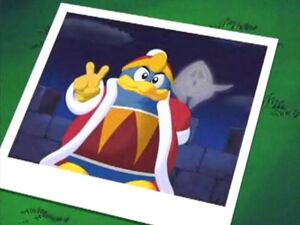 Urameshiya first appeared on a photo. 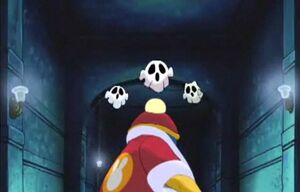 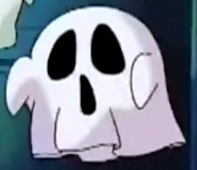 Kirby as a fake ghost.

Fololo as a fake ghost.

Falala as a fake ghost.
Add a photo to this gallery

Retrieved from "https://villains.fandom.com/wiki/Urameshiya?oldid=3441838"
Community content is available under CC-BY-SA unless otherwise noted.