Chief of the village (formerly)

Uriaș is a giant-esque monster and a supporting antagonist in the 2021 first person horror video game Resident Evil Village. He and his older brother, Uriaș Străjer, were the chief of the Eastern European village before being mutated into a Lycan by the Cadou parasite. Becoming the unnamed leader of the Lycans, Uriaș would attack the village when Mother Miranda put her plans to resurrect her late daughter into motion.

Not much is known about Uriaș' past, including is real name, but he was the chief of a Eastern European village presumably during the early-to-mid twentieth century. Alongside his older brother, Uriaș Străjer, he was infected with the Cadou parasite by Mother Miranda, a biologist who experimented on many villagers in an attempt to find a perfect body for her late daughter. Due to his body rejecting the parasite, Uriaș and his brother mutated and transformed into Lycans. Due to their size and enhanced abilities, Uriaș was seen as the leader of the Lycans by the others.

Around 2020-2021, Mother Miranda found a perfect candidate with Rosemary Winters, the daughter of Ethan and Mia Winters who survived the Dulvey Parish incident in 2017. She was capable of infiltrating the Winters circle when they moved to Eastern Europe by the suggestion of BSAA officer Chris Redfield. After capturing Rosemary, Miranda ordered the Lycans to slaughter the villagers so they could feed on the inhabitants. Uriaș is first encountered when Ethan enters the village, having been ambushed by Lycans who were killing villagers and storing their corpses into houses. Uriaș attempts to kill Ethan, but is called off by Mother Miranda since she needed him for her plan to have him kill the villages four lords.

Uriaș is briefly encountered when Karl Heisenberg puts on a "show" for the other lords, as the giant attempts to kill Ethan with his war hammer. Uriaș's attacks weaken the ground beneath Ethan, allowing him to survive and later escape from Heisenberg's clutches and reach castle Dimitrescu. He is finally encountered at the stronghold south west of the village, as Heisenberg sends Ethan to collect the last flask of his daughter. Uriaș attempts to kill Ethan by throwing columns and summoning Lycans, but is killed, leaving his remains calcified. His brother, Uriaș Străjer, attempted to defend the fungal root, but was eventually killed by Redfield during Hound Wolf Squad's raid. 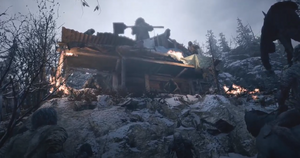 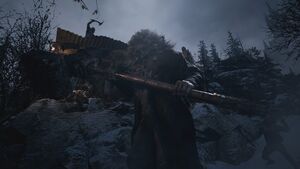 Uriaș confronting Ethan during the ambush. 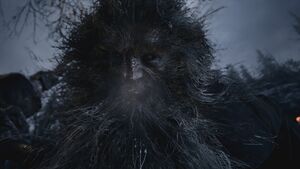 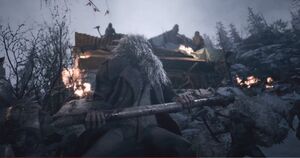 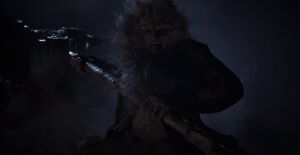 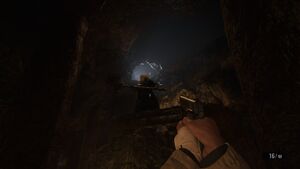 Uriaș confronting Ethan in the stronghold.