Urinal (by Lucifer)
Uri (by Amenadiel)

Member of the Heavenly Host

Superhuman strength
Superhuman reflexes
Flight
To influence, create and analyze patterns - resulting in the consequences he wishes for
Near-divination

To create his patterns and watch them unfold.

Eradicate Goddess from existence before she can return to Heaven (failed).

Uriel is a supporting antagonist in Season 2 of the TV series, Lucifer. He is the younger brother of Lucifer and the younger one of Amenadiel and had been sent to earth to enforce the deal Lucifer made with their father, God. In addition to being an angel, Uriel is also able to create patterns - causing simple movements or actions that result in what Uriel intends.

He is portrayed by Michael Imperioli.

Uriel is sent to earth by God to make sure Lucifer makes good on the deal he made with God, promising to return his mother to hell in exchange for God saving Chloe Decker's life. To bring his message across, Uriel causes Chloe to have a car accident as a subtle warning to Lucifer.

When Lucifer is later present at a crime scene, Uriel casually walks by to get Lucifer's attention. This works and Lucifer follows Uriel to a rooftop. There, Uriel reveals his mission to Lucifer. He gives Lucifer twenty-four hours to return to the same spot with his mother, or Uriel will 'finish' what he started with Chloe's car accident.

To save Chloe, Lucifer goes to Amenadiel for assistance who agrees to go to the meeting with Uriel instead. Uriel is surprised to see Amenadiel but is suspicious as well. Amenadiel tells Uriel that he has everything other control and Uriel claims that he has come to help him. Amenadiel tries to talk down to Uriel, successfully intimidating Uriel and causing him to apologize. However, he then attacks and beats down Amenadiel. Once Amenadiel lies on the ground, Uriel gloats that he knew something was off because Amenadiel usually did not talk that much but was more a man of action. Aware that he could never beat up Amenadiel at his full power, Uriel deduces that something must have happened to Amenadiel. Uriel then turns into his true form and starts beating up Amenadiel, taking revenge for all the years he was intimidated by his eldest brother.

Later, Uriel creates a pattern at a hotel near the beach, leading the falsely accused victim of Lucifer's and Chloe's last crime case to come face to face with those who tried to set him up. As Chloe and Lucifer are also present to arrest the two villains, Chloe steps in the way of the armed victim who now wants revenge. Lucifer correctly realizes that the situation was engineered by Uriel to get Chloe into harm's way and tries to warn her but Chloe manages to talk the victim into lowering his gun.

After his pattern has failed, Uriel and Lucifer meet in an abandoned church at night. Uriel reveals to Lucifer that he has come to prevent their mother from returning to heaven, as their father would likely forgive her should she return - something Uriel wants to prevent at all costs. Uriel then draws a sword that Lucifer recognizes as Azrael's Blade, a weapon that can completely erase divine beings. Uriel also reveals that he has built up a giant pattern which would result in Chloe's death two days hence. Again, Uriel gives Lucifer the choice of either sacrificing Chloe or their mother but Lucifer opts for a third option and hits Uriel in the face. The two start a fight and, although Lucifer can easily hold off Uriel at first and can even disarm him, Uriel then adapts to Lucifer's fighting style through his patterns, allowing him to evade all of Lucifer's attacks. Uriel hurls Lucifer into a pew, claiming that Lucifer is lucky Uriel will not use Azrael's blade on him.

That moment, Maze turns up and Uriel claims that he has no problems with using the blade on a demon like her. Uriel then lunges at Maze, attempting to kill her with the sword. As with Lucifer, Uriel predicts Maze's attacks and, after breaking her arm, brutally beats her unconscious. He then walks back to the dais, revealing that he is now killing both their mother and Chloe because Lucifer made it so difficult. Before he can activate the pattern, however, he is stabbed by Lucifer with Azrael's Blade. Claiming that he did not see that coming, Uriel falls to the ground and dies. Although Maze shows little sympathy, Lucifer is devastated that he was forced to kill his brother.

Lucifer buries Uriel's body in a forest together with Azrael's blade. The grave is later opened by a criminal who steals the blade.

When he arrives in hell to interrogate the spirit of Jason Carlisle, Lucifer stumbles upon Uriel. Glad at first to see his brother, whom he thought destroyed, Lucifer then realizes that Uriel is only a manifestation of Lucifer's grief and his presence is part of Lucifer's torment in hell. A personification of his guilt, Lucifer is forced to kill Uriel over and over again. In a brief moment in which Lucifer is able to have a conversation with Uriel without stabbing him, Uriel reminds him of his dying words, "The peace is here", which he claims have been a clue as Uriel is all about patterns. Uriel also mockingly asks Lucifer whether he left important business on Earth, as he will never go back. While Uriel smiles evilly, Lucifer is forced to stab him again and again.

Eventually, Lucifer's and Uriel's mother, who has come after Lucifer to bring him back, arrives and convinces Lucifer that the Uriel he is seeing is not real. While Lucifer understands this, Lucifer's mother is affected by hell as well and refuses to leave as her son Uriel, for whose death she blames herself, is right here. Lucifer drags her off as hell's manifestation of Uriel begs her to stay with him. 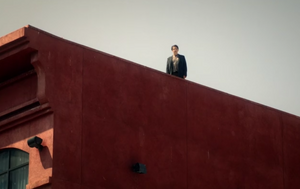 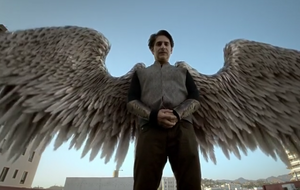 Uriel turns into his true form 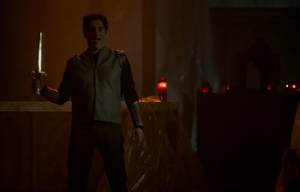 Uriel draws Azrael's blade
Add a photo to this gallery

Retrieved from "https://villains.fandom.com/wiki/Uriel_(Lucifer)?oldid=4207630"
Community content is available under CC-BY-SA unless otherwise noted.