President of the Illuminati group

Planning to take command of the Illuminati.

Become Emperor of the Illuminati (Ongoing)

Urien is Gill's younger brother and an antagonist from the Street Fighter series.

Urien and Gill were the children of members of the Illuminati, both of whom were candidates to be the president of the group. Urien and Gilll became candidates as well when Urien was six and they were separated from their parents. The two underwent genetic modifications and frequent periods of training and monitoring. Urien eventually learned to manipulate ki and his elemental abilities. He eventually learned the Aegis Reflector, one of the 66 secret arts of the Illuminati. When Gill became 22, he was chosen as the Illuminati’s president over Urien, who was named vice-president instead. He would come to bear a strong grudge towards Gill and developed an inferiority complex thanks to his emotional instability.

Urien later worked in the shadows in order to eliminate the Shadaloo organization that was going to enact operations C.H.A.I.N.S, after a fight with C.Viper, he contacted Balrog and Ed to give him information in exchange of money, he then tested the first stages of the G-Project and assisted at the revival of Charlie Nash. Urien then used Nash to take down M. Bison, but he personally layed a beatdown on him when he was informed that he failed. After the fall of Shadaloo, he planned to overthrow his brother and take his position.

Urien eventually challenged Gill to a match for the position of president and his brother lost on purpose. Thus Urien became the new president of the Illuminati, but Gill wasn’t demoted, instead he became the emperor of the organization and was still superior to Urien. Urien was placed in charge of the G-Project, a bio warfare project that operated based on the human remake theory. This project would lead to the mutation of Necro and the creation of Twelve and a set of similar creations. Urien planned to use the G-Project take down Gill by creating an army of genetic super soldiers. He eventually kidnapped a child being cared for by Chun-Li so as to genetically modify her. She managed to catch up to Urien and he agreed to let the child go if she fought him. Impressed by her skills, Urien actually let Chun-Li win and gave her the child back.

In Urien’s ending, he entered the Illumianti’s cryogenics lab, saying that the brains they had collected were just a mass of junk unable to take positive action. Urien found Gill in one of the tanks, asking if he could see the world and how his ideal world was being built. He then made the lab self-destruct and said his own story would now unfold.

Urien is tyrannical and power hungry, as opposed to his more good-natured brother. He is obsessed with becoming the Emperor of Illuminati and often looks down on his opponents. Urien often demonstrates that he has a more sadistic side, because of his emotional instability, and often yells phrases like “Destroy” or “Kill”. Urien, despite being somewhat loyal to the Illuminati, despises his brother for no reason other than being upset that he isn't Emperor.  Thus, while his personality isn't the most fleshed-out, one could tell that he cares little about his brother's goals. His emotional instability also makes him highly ruthless and unforgiving. That said, Urien does have an honorable side as shown when he let Chun-Li and take back the chld he took from her out of respect for his skills.

Urien is a powerful fighter thanks to the genetic enhancements of the Illuminati. However he is not as powerful or as skilled as his brother, for example, Gill can perform the moves he gained from their training instantly while Urien needs to charge for a few seconds before he can. When he enters battle, he transforms into a more dark-skinned metallic form and while Gill commands fire and ice, Urien uses lightning and metal based attacks. Urien’s moves include the Metallic Sphere, a metallic energy ball fired from his fist, Aegis Reflector, an energy barrier that can reflect enemy attacks, and Tyrant Slaughter, a series of rushing tackles, ending with a clothesline. 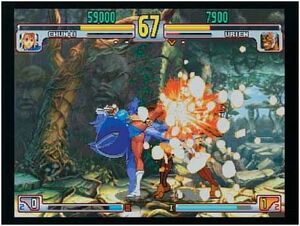