Conquerer of the Demon World
Nefarious Usurper
No Name

Seek absolute power for himself (failed).

However, in later stages of the story, it was revealed that both he and V are fragments of a revived Vergil. Years after his apparent defeat, a dying Vergil split himself into two pieces in order to fix the damages inflicted upon him. However, without Vergil's humanity holding him back, Urizen became a power-hungry demon with an insatiable thirst for becoming stronger, eventually becoming a demon emperor who was as strong as, if not worse than, Mundus.

He was voiced by Shunsuke Sakuya in Japanese version, and Daniel Southworth in English dubbed version, with the latter also voiced Vergil.

Urizen, being the demonic half of Vergil's soul, embodies his worst aspects. Unflinching in his pursuit of ever more power, he stops at nothing in his quest to become stronger. Not caring in the slightest for those he views as weak, Urizen was willing to slaughter thousands of innocent humans to achieve his goals.

While most Demons often taunt and boast about their superiority over Mankind, Urizen is stoic and reserved, maintaining an air of indifference when faced with enemies, not even bothering to rise from his throne to battle foes, most likely due to his power being something very few could ever hope to match.

However, Dante seems to understand why Urizen is the way he is, for not only is the Demon King the part of Vergil that seeks to grow in power, but also represents his desire to never again feel weak, one of Vergil's reasons for seeking ways to become stronger was his trauma from not being able to protect the ones he loved when they needed him most.

Though he indeed is mighty, Urizen is incapable of understanding how others are able to surpass him, for due to being without his humanity, he cannot grasp there are more ways to gain power besides suffering, as shown when he is perplexed by how Dante could beat him, asking him, "How can you be so powerful? You never lost anything!"

Years after his apparent death, Vergil is somehow resurrected, but dying. He soon tracked Nero as a hooded figure and rips his Devil Bringer, taking away from him and regaining his Yamato, leaving Nero to hunt him down a score to settle while fighting off the demons’ wide invasion sometimes later. After returning to his old mansion at Red Grave City, Vergil splits himself into two entities, one is a dying human self known as V, and another is his giant demon half known as Urizen.

Due to shedding the human side of Vergil, Urizen becomes a violent Demon King devoid of humanity. He turns greedy and power hungry, intending to destroy and gain power. According to V, Urizen becomes known as the Demon King and is stated to be even more powerful than Mundus, the Prince of Darkness and former Emperor of the Underworld. It was assumed that Urizen surpasses possibly even Argosax.

By the time of Devil May Cry, Urizen had taken control of the Demonic Tree known as the Qliphoth, which, when provided with a massive amount of human blood, would produce a fruit that granted its eater near unlimited power. Dante, alongside the Mysterious Figure known as V, backed up by Nero, Trish and Lady, arrive at the center of the Qliphoth, which had steadily been growing to encompass all of Redgrave City.

Dante arrives just in time to witness Urizen defeat Lady and Trish, where he announces the phrase "Jackpot!" To the Demon King. Recognizing his brother, Urizen fights him, easily beating the Devil Hunter and then Nero when he arrives. After delivering a punch so strong it shatters Dante's sword, Rebellion, Urizen swats his brother aside, launching him out of the Qliphoth and putting him in a coma. Announcing that the blade of his father Sparda, "No longer serves a purpose" Urizen captures Lady and Trish, turning them into the Demons Artemis and Cavaliere Angelo respectively, commenting on how fortunate it was for them to "Serve such divine purpose."

Well over a month later, Nero returns to the Qliphoth the confront the King, who is amused by how the boy came so far just to die. The two fight again, Urizen dominating for the most part up until Nero manages to deliver a cut to his hand. More angered than injured, Urizen heals the wound, finnally rising from his throne, stating that Nero would regret being born a useless human.

Again he with little effort defeats Nero, his attempt to kill him being interrupted by the return of Dante, armed with his new sword and Devil Form. They battle, Dante eventually managing to drive his brother back. At this time, The Qliphoth finishes growing, Urizen leaving after saying that "This Incovenience...Matters not." Dante fights his way to the base of the tree, where he comes across Urizen inside an illusion of his and Dantes's old home.

Dante tries to reason with him, saying that their mother never gave up on trying to find him, all the way up until her death. Urizen brushes these comments aside, explaining that he had no memory of this place. He then eats the fruit of the Qliphoth, transforming into a more human-like visage and gaining god-like power. When Dante states that he had just lost what little humanity he had left, Urizen states that such words were, "The pitiful cries of those without strength." He then bids his brother to come forth and fight.

However, despite all of this new power, Urizen is unable to beat Dante, roaring about how he could be so strong despite that fact he, "Never lost anything"  Dante eventually gets close enough to stab Urizen in the chest, where he collapses onto his back. Nero and V arrive, the latter climbing onto Urizen's chest. It having been revealed earlier that V and Urizen are in fact the separate halves of Vergil's soul, having been divided after Vergil stabbed himself with the Yamato in an attempt to rid himself of the nightmares from his time as Nelo Angelo.

As Urizen lay dying, he defiantly claims, "I will not lose! Not to Dante! I need power, More Power!" V explains to his dark half that they are one and the same, both sharing a hatred of Dante before he stabs him with his cane, the two vanishing in a flash of light to become Vergil once again. 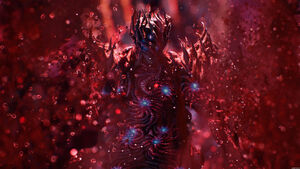 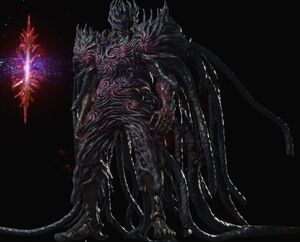 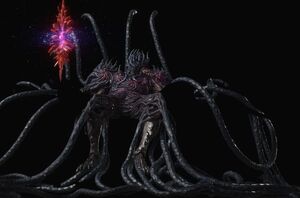 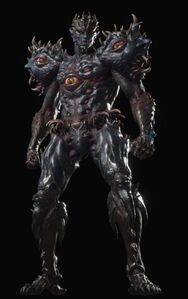 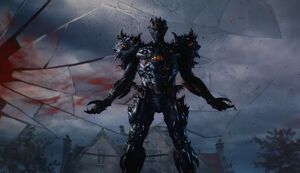