By the solar energy of the Earth's sun, Ursa has all of Superman's powers; She possesses a healing factor, invulnerability, superhuman senses, heat-vision, stamina, super-breath, reflexes, x-ray vision, freezing breath, durability, speed, and superhuman strength. Ursa is incredibly skilled in hand-to-hand combat as well as using a Kryptonite knife.

Ursa is one of Zod's two followers, and a villain from the Superman series, appearing in the first two Superman films. She is a Kryptonian criminal, is Zod's second in command, and, with the exception of him and his other co conspirator, Non, hates all men, and is described as even going after the children. She is the secondary antagonist of Superman II.

She was portrayed by Sarah Douglas.

In Superman, Ursa was convicted of her crimes along with Zod and Non, and all three were imprisoned in the Phantom Zone, supposedly for eternity and drifting into space. Shortly after, Krypton was destroyed, leaving Ursa, Zod, Non, and Superman as its only survivors. In Superman II, when Superman threw a hydrogen bomb into space, its explosion reached the Phantom Zone and destroyed it, setting all three criminals free. They traveled to Earth, stopping at the moon first, and discovering that they had super powers exactly the same as Superman. After reaching Earth, they began using their powers for evil, terrorizing cities, until Zod took over the president's office and the president informed them that Superman would stop them.

One time, out of curiosity, while out in the forest with Non and General Zod, she picks up a rattlesnake, which bites her; therefore, she throws it off and uses her eye rays to burn it.

Superman fought them, and they were able to damage each other, as individually they were equally powerful, but altogether the Zod gang was too powerful for Superman, and he was forced to retreat to the Fortress of Solitude. Lex Luthor led them to the fortress, having discovered it himself, and seemingly turned on Zod to join forces with Superman, but when Superman told him about the device to take away a Kryptonian's power, Luthor told Zod, who made Superman enter. However, Superman switched it around so it would take away the power of those outside rather than inside; namely Zod, Ursa, and Non. After Superman dispatched Zod and Non fell to his death trying to fly, Lois called Ursa a "pain in the neck" and punched her in the face, causing her to fall into another crevice, into an icy abyss to her doom. 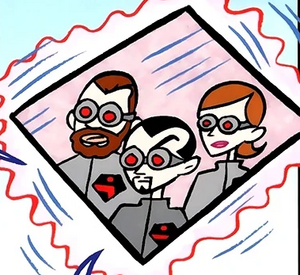 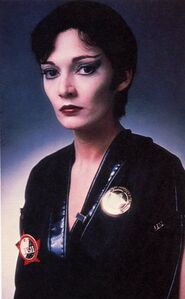 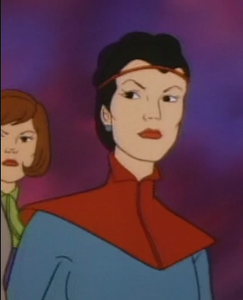 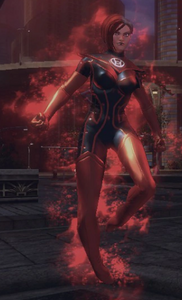 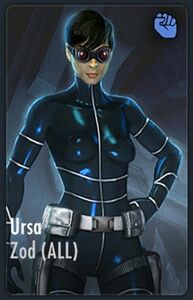 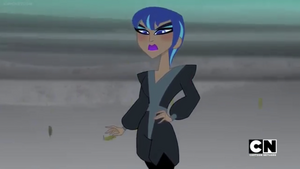