Create a wild, untamed Freljord.
Defeat the Frostguard and Avarosans.

The Ursine, also known as the Lost Ones, are a villainous faction in the lore of the multiplayer online battle arena game League of Legends.

A cult that worships the ancient Freljordian ideals of war and savagery, the Ursine are the Volibear's most loyal followers that reside in the far north. Because of their ideology, the Ursine are known to transform themselves into feral, grotesque beasts at the cost of their own bodies and sanity, which places them among some of the most terrifying warriors in the Freljord. They served as the main antagonistic faction of "Silence for the Damned" until they formed a temporary alliance with Sejuani's Winter's Claw.

In the old Freljord, the Volibear's followers were some of the fiercest and bloodthirstiest in the land, obeying their deity's vision for a wild, untamed Vorrijaard. In the service of the old gods, they were armed with Ornn's weapons and led into battle by the Volibear himself, and for a long time they were the rulers of the Freljordian wilderness. However, after a time the Three Sisters brought a new age of civilization to the Freljord, which created a new threat to people's beliefs in the old ways and Freljordian gods.

Sensing this threat, the Volibear led the Ursine to battle against the Three Sisters, but the growing rift between him and his brother Ornn became their downfall when the Three Sisters emerged victorious, claiming their place in history and forcing the old gods to fade into legend as people slowly forgot about them.

Nevertheless, a feared (albeit much smaller) group of devoted Ursine still remain after many centuries, adhering to the old ways and summoning the Volibear to battle whenever his strength is needed. This cult of followers is known to transform into the most feral and savage beasts in all of the Freljord, with grotesque forms that would strike terror into even the most battle-hardened of warriors. They are currently in a temporary alliance with the Winter's Claw, a deal which was struck between the Volibear and Sejuani after Udyr called them cowards for refusing to fight the Frostguard and Avarosans. 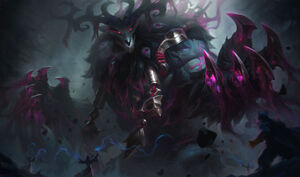 The Ursine summoning the Thousand-Pierced Bear, their deity.

An Ursine spiritwalker in Legends of Runeterra. 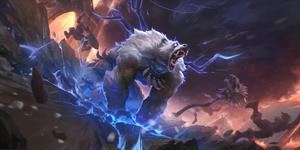 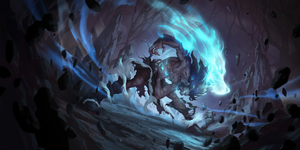 A feral mystic of the Ursine.

Concept art for the Ursine.