Likes to be in power, destroying merpeople's happiness for her own gain.

To rule the oceans, to take over Atlantica.

Ursula, also called the Sea Witch, is the main antagonist of Disney's Little Mermaid franchise. Ursula is a obese female human who is also half octopus on her lower half, thus making her a member of the underwater 'Seafolk'. She was once one of the most respected figures in the sea, but by the time the Little Mermaid, Princess Ariel's story takes place, she is an exiled subject of the King Triton's royal sea court. She was banned from his Kingdom 'Atlantica' after it was rumoured that she was trying to overthrow him. When Triton found this to be true, Ursula was forced to live on the abandoned outskirts of the ocean, away from the rest of the Seafolk and the Mer-Civilization. As a way to survive, she took up the skills of dark magic and to secretly spy on Triton and his people all in efforts to one day take over his kingdom and become ruler of the ocean.

Ursula made her home in the belly of a giant dead leviathan. There Ursula delights in making deals with "poor unfortunate souls", Seafolk and Mer-people who are miserable, lonely, depressed and overall unhappy. She lures them to her underwater chambers and promises to give them their hearts desires if they succeed in the deal she makes with them. But Ursula also secretly sabatoges their efforts to do so. Thus giving her more power by all the souls she collects as she morphs them into disfigured sea creatures who are called Polyps and are forever glued to the ground in her underwater 'Garden' which is at the entrance of her chambers. There are hundreds of these distorted little creatures at the bottom of Ursula's lair. Polyps are small plant-like animal hybrids that are anchored and grown into the floor while crying in agony, hoping others could avoid their fate, even wrapping themselves around the limbs of new visitors who are interested in making a deal with Ursula. Occasionally, they are fed dead fish by Ursula.

Ursula is voiced by Pat Carroll in all of her appearances.

Over the years, Ursula has become one of the most popular, and iconic of all the Disney villains and is one of the franchise's official members.Her appearance is of a plump light lavender-skinned, white-haired female human and from the waist down has black octopus-like tentacles. The character has been compared to Madame Medusa from the 1977 film The Rescuers, in terms of style, dramatics and choice of minions.

Ursula is the Sea Witch who makes deals with Seafolk and Mer-People. If they succeed, they get their hearts desire. If they fail, she adds them to "her garden", which is a collection of pitiful looking sea creatures who are attached to the floor. Via her song "Poor Unfortunate Souls", she offers Ariel the chance to be human for 3 days. If she can get the prince to give her "the kiss of true love" the condition would be permanent, but if not, she would be Ursula's property. Ariel accepts, and Ursula, true to her word, turns her human right then and there, at the cost of her beautiful singing voice.

Later in the movie, Ariel is "too close" to accomplishing her goal, so Ursula decides to "take matters into her own tentacles". Using her powers, she disguises herself as a beautiful dark-haired woman named "Vanessa", and uses her magic to put Prince Eric in a trance, forcing him to marry her. Ariel and her friends crash the wedding, and though they stopped it and release Ariel's voice from Ursula's enchanted necklace, Ariel is too late. Ursula reverts back to her natural form and kidnaps the mermaid. Her father King Triton, warned earlier by Ariel's friend Sebastian, tries to stop Ursula, but Ursula hides behind the contract, demonstrating that it is "legal", "binding", and completely unbreakable, even for [Triton]". The heartbroken king agrees to take his daughter's place, and Ursula finally accomplishes her goal of being the unquestioned ruler of the seas. She grows into a giant monster and traps Ariel in the bottom of a whirlpool she made. Ursula attempts to murder Princess Ariel and just as she's about to at last electrocute her to death, she is impaled on the bow of a sunken ship piloted by Eric, which causes her to explode. All the people she kept under her spell, including the king, were released from Ursula's spell for good.

She was voiced by Patt Carrol and was originally voiced by Jennifer Saunders.

Ursula's sister, Morgana (also voiced by Pat Carroll) is the primary antagonist of the movie. In it, it is revealed that Ursula was far more powerful than her sister, and the family favorite. Morgana has been trying to come out of Ursula's shadow her entire life. When Morgana surreptitiously obtains the trident, she cries to the skies that she is now the favored daughter. However, Ariel's daughter Melody steals the trident back and tosses it to her grandfather, Triton, who promptly turns her into ice. As she sinks to the bottom of the ocean, a picture of Ursula (at which Morgana regularly threw darts) sinks down with her.

Ursula appears in the TV series based on the movie as well. She appears in 4 episodes as the primary antagonist ("Against the Tide", "Tail of Two Crabs", "Heroes" and "Ariel's Treasures"), still opposed to Ariel and her allies.

In the musical, Ursula remains largely the same. Her evil nature is still present, she is still a cruel sadist who delights in the suffering of her "clients", and she is a very powerful witch. However, there are some key differences as well, the largest being that she is now thin and attractive. She is also Triton's sister, making her Ariel's aunt (an unused plotline for the movie). Her conch is no longer a necklace, but is rather kept on a stand. She still gives Ariel her human legs, still tries to sabotage her, and still seduces Eric to try and ruin her chances. However, the Vanessa subplot was removed, and instead of crashing the wedding, Ariel defeats Ursula in a singing contest. She obtains Triton's trident and conquers the ocean, but is destroyed when Ariel smashes her conch shell, the source of her power.

In the stage show, she was originally portrayed by veteran Broadway actress Sheri Renee Scott.

Ursula was one of the Disney villains that was recruited by Maleficent.

Ursula watches Sora defeat the Guard Armor in Traverse Town from her post in Hollow Bastion. She suggests that Maleficent should turn him into a Heartless, and it'll "settle things quick enough". After the defeat of the Opposite Armor, the Hellfire Club is beginning to dwindle. Ursula is still her ally, and appears alongside Oogie Boogie and Jafar, reminding Maleficent of the Princesses of Heart.

She returns to her homeworld of Atlantica where she uses Ariel and Sora to find the world's keyhole and steal Sora's Keyblade, as well as the trident. Once she obtains it, she battles the heroes in her cave, and when she is defeated there, she grows giant like in the movie. However, she is defeated again, and destroyed for good.

As in the movies and the TV series, she is voiced by Pat Carroll.

Ursula appears again in Kingdom Hearts II, revived by unknown means. Her role in the game is largely similar to her role in the movie, however, due to the fact that Atlantica is a musical based world in Kingdom Hearts II, she is defeated during the song Ursula's Revenge. Like in the movie, she grows into a giant and attacks Ariel and Eric. Sora knocks the trident out of her hands only for Eric to throw it right through her, killing her.

Ursula reappears again in Kingdom Heart: Dream Drop Distance. While Sora and Riku were going through the Keyblade Test, they had to travel to sea. While they were traveling a terrible storm started to occur. Then suddenly, a whirlpool appeared, and a revived Ursula emerged from the seas. Ursula replied that someone knew where Sora and Riku were. With their combined effort, Sora and Riku were able to defeat Ursula. However, when Ursula was defeated, Sora and Riku got sucked into the whirlpool, resulted in them ending up at the keyhole to Traverse Town.

Although Vanessa herself doesn't appear in the short story Disney's The Little Mermaid: Reflection of Ursula, she is subtly referenced with Ursula's disguise of Arsulu, a blond mermaid with a red tail and magenta shells which she adopted to infiltrate Atlantica. Just like Vanessa, mirror reflections reveal "Arsulu's" true identity as Ursula, which Ariel later exploited.

As the first major villain of the "Disney Renaissance", Ursula made a considerable impact. An official poll of the top 30 villains in Disney history put her at #5, and the Nostalgia Critic ranked her #6. Ursula was likely the inspiration for Gnorga from A Troll in Central Park. 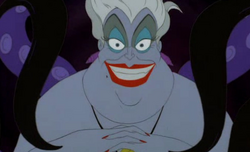 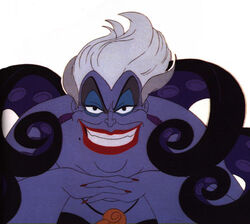 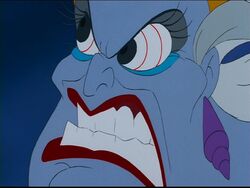 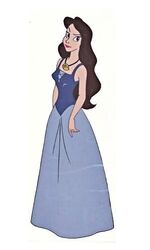 Retrieved from "https://villains.fandom.com/wiki/Ursula_(Disney)?oldid=944570"
Community content is available under CC-BY-SA unless otherwise noted.