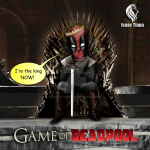 Yo. It's me, the one and only DEADPOOL! I do what I want, whenever I want. I made this user page to see the world of villainy from the outside rather than on the frontlines like I usually do.

Retrieved from "https://villains.fandom.com/wiki/User:King_Deadpool_the_Awesome?oldid=2210837"
Community content is available under CC-BY-SA unless otherwise noted.