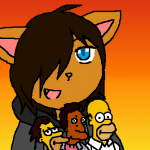 Hi there. I'm Kitty the cat. Even though I'm more into hero and anti-hero characters(since I find heroes more interesting in my opinion), I do like some villains(especially Mr. Burns and Waylon Smithers from The Simpsons) but, not as much and I don’t really spend much time on this wiki as much as on the Heroes Wiki.

I love adult cartoons, anime, some CGI films and some video games. I am a nice, kind and friendly girl but, I also have autism and suffer from mental illness.  I am also a fangirl of Lenny and Carl from The Simpsons.

See also my page on the Heroes Wiki.

My favourite villains so far are:

I will add more later on if I feel like it.

Will add more later on.

Will add more later on.

Retrieved from "https://villains.fandom.com/wiki/User:Kittycatgirl1998_0.2?oldid=3778404"
Community content is available under CC-BY-SA unless otherwise noted.