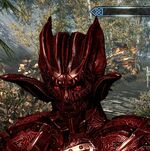 Lord of the Vampires
Thane of Falkreath
Thane of Solitude

Adventuring with his friend Erik the Slayer (formerly)

Destroy Miraak and take away his power (succeeded)
Fight his own urge, as one of the race of dovah, of dominating the wills of others (failed)
Usurp Harkon's position as Lord of the Volkihar court (succeeded)
Serve his Lord, Molag Bal
Make himself the supreme overlord of all the vampires in Nirn (ongoing)
Enact the "Tyranny of the Sun" prophecy in a planned and orderly way (ongoing)
Put an end to the Aldmeri Dominion and the whole Elven Race (ongoing)

Vlad Drakonssøn, known by the Nords of Skyrim as "the Dragonborn" or "Dovahkiin" (Dragon Tongue) was a Nord hero who lived in the fourth era and defeated the evil Dragon Alduin, the Devourer of Worlds. After such feat, the Gray Beards named him "Ysmir, the Dragon of the North".

He is currently the Lord of the Volkihar vampire court and is known as Drakula.

Born in the Province of Cyrodiil during the Great War, the man once known as Vlad Drakonssøn was the biological son of a great warrior of the Imperial Legion nicknamed “The Dragon” and a woman called Helga. However, Vlad never knew his true parents as his father fell while defending the Imperial City from Elven Troops and his mother died at childbirth, but before her last breath, she entrusted the child to Mralki who was a great friend and fellow Legionnare to the Dragon. During Helga’s last moments, she confessed to Mralki that she wanted her son to be a mighty warrior like his father. Mralki asked the dying woman the name of the child and she only awnsered: “Vlad, Vlad Drakonssøn” just before the light in her eyes faded away. After the War came to it’s end, Mralki took Vlad along with his own son; Erik, to his homeland, the northen province of Skyrim.

In Skyrim, Erik and Vlad grew to be close friends over the years, both fantasizing about becoming great warriors and adventurers like the Nords of old. Mralki, however, was not sure of the idea of letting his son Erik live a life of violence and death such as himself, so he tried to get him interested in becoming a farmer in Rorikstead. His attempts were unsuccessful, and the fact that he did train Vlad longer in the arts of the warrior while he was only being trained just enough so that he could defend himself against some bandits certainly did not help. One day, when both Vlad and Erik confronted Mralki about this, the old man was evasive at first and insisted that both were trained equally. However, when both friends pushed the subject, Mralki quickly dropped his facade and said that he remained firm on his decision to make his son "a man of family and not a man of violence" like he once was or like Vlad's father, even going as far as to state that searching for violence is what eventually killed the famed "Dragon". Enraged, both friends stormed out of Mralki's Inn and decided to make adventures of their own.

They traveled Skyrim far and wide, eventually becoming mercenaries (as Vlad thought it would be a good way for Erik to improve his combat skills) but dreaming of one day being worthy and experienced enough to join the Imperial Legion, like their parents did. Generally, the local Jarl would pay them to kill some trouble-maker nearby or, if they were lucky enough, they would be tasked with taking down local bandit band. But such occations were rare and the bandits were just poorly-instructed deserters at their best anyway. However one day they were enjoying their drinks at the Bannered Mare, one man appeared before them. He was covered in black robe and thus, his facial features could not be seen. He sat before them quietly and handed them over a letter that was written by Jarl Balgruuf the Greater. The letter claimed that there was a Giant troubling Darkwater Crossing and that whoever took care of the problem, would be handsomely rewarded the sum of 800 Septims. Delighted at the possiblity of a glorious battle with a great reward, the hot-headed Vlad agreed with enthusiasm. The more pragmatic Erik was not convinced, however and demaded an explanation on why the Jarl was interested in defending lands that weren't even his to begin with. The robed man explained them in a cold voice that Jarl Balgruuf has an agreement with the man's lord, Count Bran, and the details of such agreement involves defending the Count's lands with mercenaries from Whiterun. Before Erik can reply, Vlad interrupts him and tells the man that they would take the contract. Later that night in the room they were renting, Erik tells Vlad that this could be a trap; that something in the whole situation just seemed to be wrong, noting that the man conviniently never told them what this "Count Bran" did for the Jarl in return. Vlad however, quickly tried to reassure him by pointing out that there was no reason to lay a trap on simple mercenaries such as them and that this would be the ultimate battle they would fight at that point. Partially reassured, Erik agrees with his friend.

In the next morning, Vlad and Erik rent two horses from the stables and set their course to Darkwater Crossing.

Retrieved from "https://villains.fandom.com/wiki/User:Lord_Maaar?oldid=3650184"
Community content is available under CC-BY-SA unless otherwise noted.