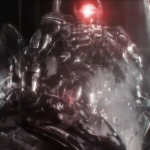 Intelligent, cunning and completely insane, Thomas Macek, also known as Lord Shockwave was a man who sought to eliminate society at every cost. Macek is a brilliant man who is a war stragetist and society expert. He was once a member of the British Parlement but was asked to resign, because he was "crazy". In his speech where he proclaims that "weird" people are superior to "normal" people, and that they only can realize their true potential if society is destroyed. Ever since then Macek has become one of Europa's most dangerous fugitives, willing to go trough any length to ensure his plan would succeed. Macek sought to use legendary artifacts, political crimes and even a nuclear war in order to destroy his entire country. He believed that if he could engage a war between various countries around the world, then most of society would be wiped out, with only people like him surviving and bringing a new era of peace into the world.

Thomas Macek was born in the beginning of the 90's by Martin and Erica Macek. At the age of 3 it was already seen he was different, his psychological problems where under mere Autism and ADHD. He was very devoted to his younger sister Lara, which he loved like no other. However Lara was soon diagnosed with Schyzophrenia, and she was frequently bullied. He grew in an enviroment where he was loathed and bullied, he only had Lara and they where very close. When Macek was 14 years old, his parents decided that Lara would go to an institution because they couldn't handle her Schyzophrenia. Thomas firmly objected but could do nothing to stop Lara from leaving. This left him depressed for years.

Macek despised humanity for its inability to accept those who where different. He studied hard and often worked day and night on various ways to ensure that humanity would accept people like him and his sister. At the age of 16, he deemed society responsible for the suffering of his "kind" and vowed to destroy it. His parents found out about his ideas and planned to also put him in an institution to "cure" his "disease". However Macek was fully aware of this. He confronted them saying "you two and this society never accepted my kind. You outcasted your own children, Lara and me are special. And if you can't accept that, then burn in hell along with your vile kind called normal species" and he shot both of them dead with his new arm cannon he had constructed. Macek then took all of his stuff and plans and left the house before burning it down. Looking up at the sky and saying. "My name is Shockwave. And tommorow everything I do, will be for the good of my kind."

From that moment on Macek lived on his own. But visited his sister every week playing chess with her, he enjoyed every moment with her, and so did she. 5 years later Macek finished his studies and began to put his plan in action. He chose to become a member of the British Parlement, in hopes of destroying society from inside.

Now calling himself Shockwave. Macek proceeded to learn every legend or method in hopes of finding away to destroy society for good. He intended to use various legendary artifacts for this cause. And his eyes where first locked on Excalibur, the magical sword laying in Avalon. However the British secret service known as MI6 suspected he was up to something and put a team to find out about him, lead by well known agent James Bond.

Shockwave's goal is to annihilate the society. He believes that his "kind" the weird people are superior to normal people. And that society is holding them back.

Retrieved from "https://villains.fandom.com/wiki/User:Lord_Shockwave?oldid=2143752"
Community content is available under CC-BY-SA unless otherwise noted.