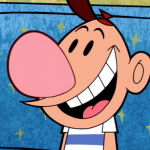 Destroying the dreams of other people.

Billy the villain is my Villains wiki character he served has the main antagonist in the Big Dumb Deventart Game , it was a personal game i hace done with no viewers just me. The Big Dumb DeventArt Game i did a while back since i was felling super bored i did i survivor type thing with random characters i drawn.

Billy was the highest Ranking Villain in The Bug Dumb Devent Art Game where he won a normal season, Won an all star Season, and Got 5th place in the final battle of The Big Dumb DeventArt Game and he was defeated and killed with honor by the Champion and main Protagonist Billy Willy.

My Favorite Villains (In no particular order)

Retrieved from "https://villains.fandom.com/wiki/User:NotSoEvilBilly?oldid=2633338"
Community content is available under CC-BY-SA unless otherwise noted.