View source
uh, what is this? This is a box that tells me how much I like Valley Orchid, Yelan. Also, I'm just one user who likes Genshin.
Anyway, I guess I'm one of the few Koreans on this wiki. Enjoy a happy life.
Wow, welcome to my very, very cold page. I'm Korean, and I often use a translator, so there are a lot of grammatical errors, but I'm trying my best to improve my judgment. Here you will find some of my favorite villains and some of my hated villains. also, i'm a Ice Queen's Worshiper.

PANICKING LEADS TO AN EARLY GRAVE

Get on the whitelist of proposals. (succeeded).

not proficient in English

I'm a former high school student who likes villain characters living in Korea, and I'm currently preparing to go to college. Also, since I'm Korean, I'm not good at English, so I use a translator to write, so the grammar may not be correct. I will often add Korean villains to this wiki. (also, i'm Male.) also, i am working as an OTOMAD creator on Youtube, In the Korean community, or me in the OTOMAD community, I am called Usagi.

I'm Member of the Siblinghood of the Tri-Demigods, a group of Jacob, TAD, SleepingGuy and Bazilsiraj.

And, a big thank you to JacobKyleF for making my birthday present and my current profile image.

The First Winner, Esdeath. A ICE QUEEN. She's always been my Waifu number one, and along with Psychopathic Demon, she's my favorite ice villain.

The Second Winner, Yuno Gasai. A YANDERE QUEEN. She can be said to be a menacing yandere along with My Queen, and she is an Omnicidal Maniac, so in a way it is much more dangerous than My Queen.

The Third Winner, A Control Devil Makima. She truly admired the Chainsaw Man, and her insecurely really brought tears to my eyes. Come to think of it, her rival Esdeath is also insecurely.

The Fourth Winner, Raiden Shogun. She's a Genshin Impact version of Raiden Mei and cooler than Mei, but her original Raiden Ei is so cute and lovely.

The Fifth Winner, Satou Matsuzaka. A ANOTHER YANDERE QUEEN. She has pink hair like Yuno, Yandere Queen and Onmicidal Maniac, and her feelings for Shio are really charming, showing what happens when family love takes extreme turns.

The First Winner, Douma, A Nihilistic Monster and Psychopathic Ice Demon. He doesn't live up to Esdeath's heinous standards, but in all other respects he's much darker and worse than her. he is faux affable, delusional and hypocritical liar. 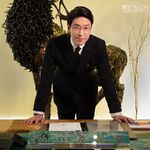 The Fourth winner, Evolt. He was a terrible Cataclysmic villain, but his humor made me laugh, he was also charismatic and I thought his black hole form design was really cool.

The Fifth Winner, Bill Cipher, a lluminati one-eyed triangle Boi, has a really unique personality, and he's an Onmicidal villain no less than Evolt, but he's really cute.

The Sixth Winner, Nolanverse's Joker. He was the best Pure Evil clown I've ever seen. He was far scarier than Bane, and he's probably the most shocking villain in the history of superhero movies. R.I.P Heath Ledger. 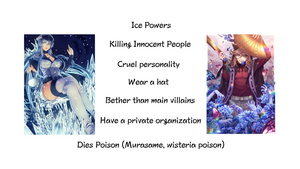 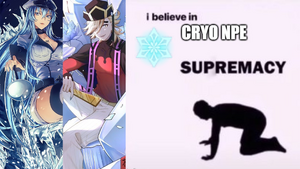