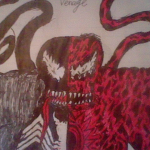 Rule the universe and do whatever he pleases.

I am Venage237. My real name is classified. I started out as an anti-hero known as Venage and did anything I wanted while trying to aid certain heroes. But after I was killed and revived by a mad scientist I became a powerful cyborg version bent on universal domination known as Venage237.

When I was a young man, I witnessed a meteorite fall from the sky. When I found the Meteorite, I encountered two Symbiotes spewing out of the Meteorite. When I got to close both of them decided to grab and bond with me. One of them was black, the other was red. Half of me resembled Venom, while the other half resembles Carnage (hence the name Venage). The two suits granted me great powers such as a huge ammount of strength and near invuneralibity. But the suits also started to change me. I originally wanted to use my powers for good but eventually the suits started to take over and led me to become an Anti-Hero. Because of this, the suits nearly ripped me apart. I became so powerful, that several heroes had to team up in order for them to just to slow me down.

Eventually, I calmed down and managed to gain control the suits, but all that changed when a great evil came and tried to destroyed the world. Me and hundreds of heroes, and a few villains teamed up to defeat this great evil. The battle had some several casualties, me being the last to fall before the Great Evil was killed. It was I who killed this Great Evil before I died. A funeral was thrown in my honor and all those who lost their lives.

You would think my story would end after my death, but you're wrong. Apparently a Mad Scientist grabbed my corpse and took it to his lab. He was impressed with my powers and didn't want to go to waste. He repaired and modified my body and became a cyborg. When I woke up, I saw what the Scientist did to me, but instead of rejecting it, I accepted it, but I didn't accept the Scientist. So I killed him before he could deactivate me, but before he died he told me that my name was Venage237. Apparently he was watching me for some time and was fasinated by my strength, Soo he tried to create clones of myself, but all of them died and it took him 236 tries before he recreated and reanimated me.

My Reign of Terror

After I killed the Scientist, I went mad with power. I was more stronger than ever and everyone feared me. With my new body, my strength, speed, intelligence, and just about everything about me was increased ten, no a hundred fold, and aquired new abilities, such as adapting and copy ability. I could freeze anyone with my ice cannon, and could destroy anything with a single swipe of my claw. The heroes tried to stop me again, but they coulsn't to a thing about me. In the process I killed 14 heroes with little to no effort, and aquired their powers. But as the years went by, I killed more heroes and even villains and aquired their powers. I Eventually became the ruler of the world. When I got bored ruling the world, I thought to myself, "If I could rule the world easily, why not rule the whole universe," and I'm still on the verge of ruler the Universe. I manage to rule 2 galaxys, but I know that there are more galaxys to rule, and due to my immortality my goal to rule the universe will never end...

Retrieved from "https://villains.fandom.com/wiki/User:Venage237?oldid=3225009"
Community content is available under CC-BY-SA unless otherwise noted.