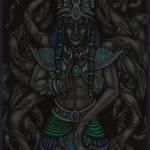 5 Edits since joining this wiki
August 24, 2011
0 Discussion posts
one by one they bite the dust and i always kick their buckets until their dust ~ Vincent Calitori

when he was only 2 he was raised in Florida,Daytona beach with Mary Calitori and Sir Edward "Ripper" Calitori who made Vincent what he was now today without his parents but on his 5th Birthday both parents was killed by a car accident and he was then raised by his uncle Hannibal Calitori.

When he was caught killing 19 people in a building and was acting like he was a madman he went to an asylum to get better but when his realese came upon the weekend he then man slaughtered the whole asylum building and escaped killing both authorites and criminals.

They couldn't find vincent anywhere but some people from the hitman services were dying one by one and authories discovered that Voodoo was involded the killings and so that becomes on of vincent's skill to do voodoo magic but in the evil way but was stopped by being caught again but this time in jail.

Retrieved from "https://villains.fandom.com/wiki/User:Vincent_Calitori?oldid=1671770"
Community content is available under CC-BY-SA unless otherwise noted.