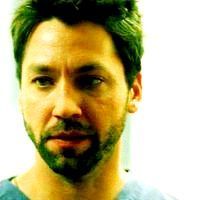 Pathology is a 2008 crime thriller movie concerning a Med school student named Ted "Teddy" Grey. After graduating at the top of his class in Harvard, Teddy becomes a member of a prestigious pathology program. Once there, he meets a group of medical students who have a secret. After hours, they would play a game, the goal being to see who could commit the perfect murder. Teddy initially believes that the killings that the students would commit were vigilante in fashion, but to his horror, he realizes that this is far from the truth.

Dr. Jake Gallo is the ringleader of this group of medical students who looks down on others because of their perceived impurities. However, as what will soon be disclosed, he commits murders simply for the pleasure of it rather than for any sense of vigilante justice.

What has he done?

Gallo invites Teddy to accompany him one night, which leads to a man getting killed and his body getting sent to the morgue the next day. Teddy formulates a hypothesis on how the man most likely expired, and Gallo offers him an invitation into the group. Eventually, Teddy accurately concludes that Gallo murdered the man by giving him a bottle of beer laced with a mixture of ethanol and nitric acid, and he then shot him before taking his body.

Teddy continues to be a member of the group until Dr. Juliette Bath -- Gallo's girlfriend -- asks him to help her dispose of a man she claims to be her father. To his horror, he realizes that not only was her father still alive, but that this man was completely innocent. He goes to confront Dr. Gallo only to see that he had gone on a psychotic rampage, gruesomely bludgeoning three prostitutes to death in the frenzy. Gallo gets offended by Teddy insulting his handiwork, and follows him in his car. He sees Juliette trying to seduce Teddy at his apartment, realizing that the two had been sleeping with each other under his nose. Enraged by her infidelity, Gallo murders her and prepares her body for the next game.

Before the group of medical students could begin to harvest Juliette's body to search for the cause of death, Teddy fills the room with a flammable gas. One of the students lights his crystal meth bong, causing an explosion. The explosion claims the lives of five of the students. Somehow, Gallo survives, and furiously stares at Teddy as he walked out of the building. Gallo remembers that Teddy's fiancee, Gwen Williamson, was staying at Teddy's apartment, and he goes there, murdering her. As Teddy was in the middle of filing her autopsy report, Gallo attacks him, knocking him unconscious. When he comes to, Gallo begins to play a sadistic game of verbal barbs with him, mockingly stating that he won as he committed the perfect murder. Unbeknownst to him, another pathological student -- Ben Stravinsky -- was hiding in the room, and he pounces on Gallo. Freeing Teddy, the two kill Gallo in the same way that he murdered Gwen.

He has none. He is deranged, but it's never to the point that he doesn't have a firm grasp of what he's doing. His whole "getting rid of filth" rhetoric is just him trying to justify committing murders. He has no real motivation behind what he does. He views other people's lives as being inferior to his own and is more than happy to kill them in horrible ways.

And then there's him and Juliette. He makes it clear to her several times that he only sees her as a sex object under his possession, and coldly kills her when he began to suspect that she was sleeping with Teddy. As for Teddy, he does admit a few times that he is more clever than he gives him credit for, but he has no hesitations towards trying to kill him.

Oversees the group conducting the murders. By himself, he killed 6 people throughout the film, and takes some disturbing gratification from doing so. As for Teddy himself, he assisted in the murder of that man he assumed was Jennifer's abusive dad (and also a patient accused of murdering his family), and he later stages an explosion in the hopes of killing the medical students. For the most part, Teddy does not engage in any of the other killings upon realizing that the victims were innocent.

Retrieved from "https://villains.fandom.com/wiki/User_blog:AustinDR/PE_Proposal:_Dr._Jake_Gallo?oldid=3857945"
Community content is available under CC-BY-SA unless otherwise noted.