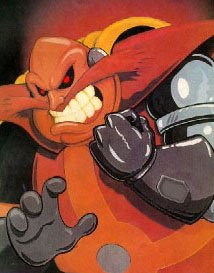 Sonic SATAM is a 1993 cartoon series that was one of the more "darker and edgier" takes on the game series.

A darker incarnation of the typical comedic mad scientist, Dr. Julian Robotnik was once the Minister of War to the king of Mobotroplis. He was a chronic backstabber. Once, he discovered another realm known as the Void alongside the wizard Naugus. Naugus decides to go into the portal, telling Robotnik to retrieve him in an hour. Robotnik begrudgingly agrees to his request -- except the moment that he stepped foot into the portal, Robotnik orders his nephew Snively to seal him in so he could rid himself of the only person he was afraid of.

Shortly afterward, Robotnik slowly planned a coup against the king of Mobotropolis and also stole the plans for a machine called the Roboticizer from Sonic's uncle Charles the Hedgehog. He sets the coup and banishes the king to the Void, and swiftly took over Mobotropolis, renaming it as Robotropolis. He then sees to it to roboticize the populace, making them robotic slaves. Worse, the slaves are perfectly aware of what had become of them but are unable to fight their programming which compels them into attacking their friends and loved ones. Robotnik essentially transforms Mobius into a wasteland, keeping it that way for ten years.

The Freedom Fighters are established and they spend the first two seasons trying to overthrow Robotnik. Robotnik, in turn, devotes much of his time obsessing over destroying his archenemy Sonic the Hedgehog, threatening torture on his allies and the like. By far his worst plan was in the series finale "The Doomsday Project." In it, Robotnik tries to use a device, the titular Doomsday Project, to totally make Mobius into a lifeless landscape. He captures Sonic and tries to roboticize him as well, but this ultimately ends up in Robotnik's reign coming to an end. Robotik leaves his henchmen and Snively to die as an effort to save himself, his final words being how much he "hated that hedgehog."

Had the series continued, Snively would've been revealed to have released Naugus and Robotnik himself would've also been revealed as still being alive. But alas, the series was canceled most likely for low ratings.

No tragic backstory here. He was just a sadistic, power-hungry sociopath. As for mitigating factors, he did have a pet robot chicken named Cluck that he seemed to cherish. But it's largely more that he treats Cluck as an accessory rather than genuinely loving it. It's made apparent that he values it because it was metallic. That, and the bird is gone in the second season where Robotnik becomes worse in his actions.

Sets it. He condemns many Mobians to And I Must Scream where they are aware of their transformations but are unable to fight their programming. Then his plan in the finale was him trying to kill everyone and leaves his henchmen and nephew to die.

Retrieved from "https://villains.fandom.com/wiki/User_blog:AustinDR/PE_Proposal:_Dr._Robotnik_(SATAM)?oldid=3360645"
Community content is available under CC-BY-SA unless otherwise noted.