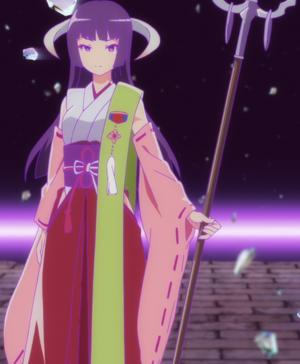 Higurashi: Gou and Sotsu are the names of the sequel series of the anime adaptation of Higurashi: When They Cry released by Passione. Taking place after the events of the original anime where Takano was defeated, Rika finds herself back in the year of 1983 despite successfully escaping the loop before so she now has to figure out how to escape once again.

It later turns out that Satoko, her best friend, was the second looper who was the one who trapped her in the loops again and is determined to make Rika stay in Hinamizawa regardless of the costs. However, Satoko herself doesn't count due to a plethora of reasons such as her upbringing; her traumas; and how she does redeem herself in some ways at the end. Instead, I will be debating her enabler.

Who is she? What has she done?

Eua, or "Oyashiro-sama," is a mysterious godlike being who Satoko met in the Sea of Fragments, or otherwise a multiverse. After Satoko became distraught with her time at the St. Lucia Academy, she finds herself drawn to the Ritual Storehouse where she discovers a horn that had fallen from the shrine of Oyashiro-sama, the patron deity of Hinamizawa. By touching the horn, Satoko is whisked into the sea of fragments where Eua at first identifies her as Vier among other names and gives her the ability to loop in return for her entertainment. However, she also explains that those abilities would only be activated in the events of the death of the looper (though there is some implication that Eua could be lying through her teeth).

As such, Satoko goes back to 1986 and when her attempts at dissuading Rika to give up on her dream failed and she went with her to St. Lucia anyway, Satoko causes the glass chandelier to collapse and it crushes her and Rika to death starting the loops over again. From there, Satoko tries to gaslight and manipulate Rika going as far as to administering L5 of the Hinamizawa Syndrome to different characters resulting in them committing several gruesome murders during their fits of madness all as a means of making Rika break.

Meanwhile in the Sea of Fragments, Eua lounges around enjoying all the carnage and misery her pawn is causing. However, Hanyuu herself manifests and tries to fight Eua after becoming horrified that Eua had given Satoko looping powers. The "fight" doesn't last too long due to Eua being presumably more powerful than Hanyuu and she binds her. She then forces Hanyuu to watch Satoko perform the Watanagashi ritual on Rika, as in having Satoko slice Rika open and disembowel her.

After being forced to watch Rika's suffering, Hanyuu does escape her restraints only to be suspended in the air with Eua drawing some of her blood with her staff. Hanyuu is able to make a wager with Eua, however: if she were to demonstrate a miracle to her, then she would have to leave their universe. Eua agrees saying that if Hanyuu failed, then she would cease to exist. Hanyuu does try to speak reason to Eua by saying that she was just like her at one time but that was before she came to believe in miracles. This does not deter Eua, however, and she buries Hanyuu in piles of junk but comes short of killing her.

While Rika and Satoko were fighting over Onigari-no-ryuuou, a sword that Hanyuu claims is meant to kill one who loops, they both drop the sword in their brawl, and it somehow ends up in the Sea of Fragments. Bewildered, Hanyuu resumes her battle with Eua and manages to take a slice from her horn/"memory device." This reverts Eua into a smaller version of herself. Having been proven wrong, Eua cackles and exits the universe the anime took place in.

There was a lot of speculation of whether or not Eua was actually the Witch of Theatergoing, Drama, and Spectating Featherine Augustus Aurora, a godlike witch from the Umineko visual novels. Eh...Ryukshi07 has the tendency of being incredibly vague with a lot of his work as he himself stated in an interview that while Eua's appearance and similarities were intentional, they both had different voice actresses and Eua's name was not meant to be the same as Featherine's.

Even then, sure you could also make the argument that it lines up to what Lambdadelta mentioned about how Featherine's memory device got broken and that caused a drastic change in her personality, Eua becomes a...kind of chibi-fied version of herself. That, and she looks more like Hanyuu as well. Overall, there could be said to be heavy hints that Eua and Featherine are the same person, but when you really look at all of it, it overall is largely sketchy. It was also mentioned that there could possibly be even more high beings than Eua, but they are not shown.

With Satoko, Eua obviously only values her at first because of how much entertainment she was giving her by brutalizing Rika and her friends and secretly was creating Satoko's witch half and sadistically watches the witch half seemingly kill Satoko's human side.

As for the deal she made to Hanyuu to leave if she were to demonstrate a miracle to her, she does seemingly keep it and leaves...but that is after she caused a ton of suffering and pain on Hanyuu and the others. It feels insincere all things considered and there is no indication that Eua would seriously honor her part of the deal. But I'll leave that up to you to decide.

So in the series, we have Miyo Takano who is the mastermind behind the loops where Rika is killed and then causes the Great Hinamizawa Disaster that ensures the deaths of over 2,000 villagers to prevent the spread of the virus. She also has the backing of Tokyo, more specifically Nomura, who has her own reasons for financing Takano's research into the Hinamizawa Syndrome such as using it to create a bioweapon that would make Japan into the next superpower.

Then there's Satoko herself who drugs her own friends driving them to become insane, homicidal maniacs that kill several people during their rampages, and then there is her brutalizing Rika and trying to gaslight her into staying in Hinamizawa with her and coldly felt that her actions were weightless due to how she could just travel to the next fragment.

Eua is the one directly responsible for giving Satoko those powers and restarting the loops meaning that she is responsible for all the bad things that happen in Gou and Sotsu by being a serial enabler. There is also that bit of personal cruelty such as her laughing in Hanyuu's face as she forces her to watch Satoko gut Rika (especially bad when you know that Hanyuu gave Rika looping powers because that reminded her of her own daughter that she had thousands of years ago).

Would have to level with you: I lowkey hated Gou and Sotsu because they felt unnecessary due to how the series originally wrapped itself up somewhat nicely. I just completely hate that Satoko was made a villain whose motivations amounted to "I hate studying." Eua was absolutely pointless in the overall scheme of things as well particularly the whole "is she Featherine or is she not?" Ryukishi is notorious for never fully committing to connecting Higurashi and Umineko aside from some minor allusions that are baseless.

But going back to Eua, I will leave it up to you on whether she genuinely keeps her word at the end or not.