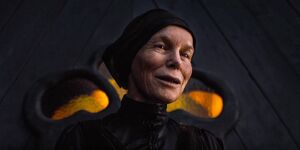 So Gretel and Hansel (2020). Another retelling of the Brothers Grimm fairy tale Hansel and Gretel. Much like with any other telling, Hansel and Gretel end up in the woods, in this case after their mother had a psychotic episode, and kind of threatened to hack her children up with an ax if they didn't leave (Gretel did try to get a job and went to an interview...but the guy quickly turned out to be a Dirty Old Man). Like the other versions, they end up meeting a seeming old lady (except no gingerbread house in this take).

The Wicked Witch has a name in this version, that being Holda. The movie features a fairy tale within a fairy tale about how a village girl was stricken by an ailment, so her father went to an enchantress to heal her. While the enchantress did so, she also left a power in the girl which granted the girl the ability to see into the future. She used her powers to kill others, including her own father by forcing him to devour a flaming tip of a metallic rod.

Holda resented her daughter and tried to send her away but she still lingered in her mind. But when the daughter told her that she too could have a share of her power if she "trusted the darkness." With that, she had to let go of her former life...doing so by killing and eating her other children. She then disguised herself as an old woman to lead more children to her house to kill and eat to increase her dark magic, racking up several bodies for their spirits to be trapped around her home.

What has she done?

Aside from the aforementioned luring children to consume, Holda takes Gretel under her wing as a means of helping her awaken to her witch powers (don't really know how she sensed them). Like the original tale, Holda starts feeding Hansel to fatten him up, but the exact motivation behind it is new to this film. Hansel starts to become suspicious of her, but Gretel quickly shuts that down.

Eventually, it seemed that Hansel had vanished. Gretel senses something to be amiss, and attempts to poison Holda. But...Holda anticipated it. She takes Gretel down into a room in the house where she reveals that the food that she and Hansel were eating were actually the body parts of children, demonstrating it previously by eating something and pulling a long strand of hair from her mouth. She explains to her that she'd unlock her true potential by tossing aside her barriers...in this case by eating her own brother.

She straps Gretel's wrists to the table to force her to watch her enchanted brother climb up a ladder and jump into the fire pit below. However, Gretel manages to use her magic to send her staff to Holda and rams her to the wall with it. She puts more force on it to decapitate her, ending her malevolent legacy, thereby freeing the souls of her victims.

In her backstory, she explains that the story of the girl with the little pink cap was actually her child who she tried to get rid of out of anger from "taking everything from her" by having her husband kill herself. However, when she realized that she also could share her daughter's powers by severing her ties with any barriers to it, she accepts it willingly and kills and eat her remaining children. All for the sake of power.

With Gretel, she becomes a mentor of sorts when Gretel began to awaken to her own powers. On the main page for the film, there is a claim that Holda was being AffablyEvil with the children even when her true nature is revealed after surviving the poison attempt on her life. But, no. I do not agree with that. Holda was largely interested in preserving her dark legacy as the primary reason for taking Gretel under her wing and tries to force her to eat Hansel knowing full well that Gretel vehemently opposed it going as far as to bind her hands to prevent her from intervening.

Multiple child murders over the years as represented by the ghosts of the slain children. Ate her own children for power and consumed others to further empower her dark abilities. Also tried to force Gretel into eating Hansel.

Leaning towards a slight keep due to some aspects of her backstory. While she may have been angered by her daughter for killing her husband, she then went onto kill her other children in a gesture of freely tossing aside her former life.

Retrieved from "https://villains.fandom.com/wiki/User_blog:AustinDR/PE_Proposal:_Holda?oldid=3564809"
Community content is available under CC-BY-SA unless otherwise noted.