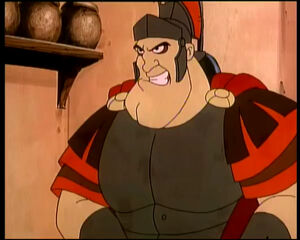 The Story Keepers is a Christian cartoons set in 64 AD Rome. The evil ruler, Nero, sets Rome on fire and then pitches the blame on the practitioners of the growing Christian religion. One of the secret Christians, for instance, is named Ben, a baker, who is apart of a small group dedicated to keeping the story of Jesus Christ of Nazareth alive.

Nihilus is one of the centurions under the emperor of Rome, Nero. Sometime after the Great Fire of Rome, Nihilus makes several plans of getting rid of the Roman Christians one that included tossing burning debris into the tunnels that Christians were hiding in. Over the run of the series, Nihilus grows progressively worse; when he learns that a fellow centurion, Tacitus, had become a Christian, he becomes bent on killing him for his treachery. His rivalry with Tacitus would also show that Nihilus was more than willing to harm a child if it meant getting at his enemy.

In "The Easter Story Keepers," Nihilus is appointed with mentoring a soldier named Capella. Whilst trying to expose Ben, Nihilus tries to manipulate the children against the baker by claiming that he was actually planning on keeping them all as slaves to work for him. When that didn't work, Nihilus decides to set the house on fire with the children and Ben's wife still inside. When he had Ben in his clutches, he takes him to the Coliseum to crucify him. He gives the nails and hammers over to Capella, but Capella turns against him, having redeemed himself by accepting the story of Christ. Enraged, Nihilus stabs him and he dies. However, Nihilus is then forced to flee when Emperor Nero decides to crucify him instead after becoming fed up with his failures.

In his final appearance, Nihilus tries to sell Tacitus and Ben to bounty hunters. After tracking them to Shem Hadar, he engages in a fight with Tacitus which lead to him losing his footing. As he was dangling off a cliff, he refuses Tacitus' hand and falls to his death.

No excuses for why he does what he does. Despite the show's main theme being forgiving your enemies and seeking redemption through Christ, Nihilus stands against that ideology and does not accept forgiveness and sure as hell rejects the notion of redemption.

He is also played seriously in all his appearances unlike with Emperor Nero who, while enacting truly reprehensible crimes, is nevertheless heavily played up as a joke villain.

Attempted murder and genocide. He constantly serves as the muscle for Emperor Nero and goes beyond that such as with his willingness to kill children if it called for it.