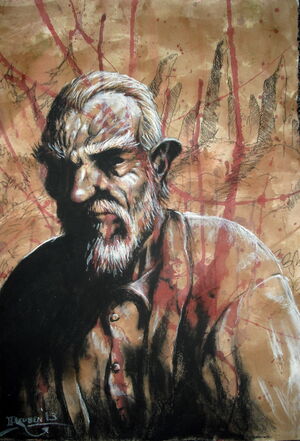 The Dunwich Horror was one of the most famous works of the late H.P. Lovecraft about the fictional town of Dunwich, Massachusetts, where rumors of incest and dark sorcery run amok. Of the rumors circulating includes those of the Whateley residence where the latest born, Wilbur Whateley, grows up at an inhumane pace and is slowly revealed to be of a nightmarish lineage.

Old Man Whateley was a practitioner of the dark arts who at first seemed to be a half-insane old coot. However, many remember when the hills once shook when he uttered the name of Yog-Sothoth. On one occasion, he gave his daughter Lavinia up as a sacrifice to the Outer God and she was impregnated. From her screaming, it is clearly not a painless process. She gives birth to do twin boys -- Wilbur Whateley and the titular Dunwich Horror itself. He spent the duration of his time purchasing cattle despite the number ever going up, and some of the villagers had seen his cattle gruesomely slaughtered. He also heavily weighs down on Wilbur indoctrinating him with the knowledge of the dark arts and witchcraft. They also make alterations to the house to hold the Dunwich Horror.

Whateley was also speculated to have killed his own wife. He would die one day, giving out orders for his grandson Wilbur to carry out. Lavinia herself also disappeared under mysterious circumstances presumably as a sacrifice by Wilbur. Wilbur had the Necronomicon in his possession but needed a certain page from it so he could summon the Old Ones back to Earth through Yog-Sothoth's powers which would spell the destruction of all life on the planet. Unfortunately for him, he was unable to acquire the passage and when he tried to steal a copy of the book at a library, he was mauled to death by a dog. The villagers also come together to destroy the Dunwich Horror with a spell, it screaming out the name of its father as it was killed.

No. He gave his own daughter over to be impregnated by an eldritch abomination. With Wilbur, he saw him as a means to an end not loving him but instead indoctrinating him into the dark arts so he could unleash the Old Ones. The only issue really is that there is never really given a reason as to why he wants to free the Old Ones, but the way that he goes about trying to do so fully establishes him as a psychotic maniac.

While there are a plethora of cults trying to bring about the return of the gods like the Cult of Cthulhu, but none go as far with it as Old Whateley does by allowing an eldritch abomination to impregnate his own daughter.

Retrieved from "https://villains.fandom.com/wiki/User_blog:AustinDR/PE_Proposal:_Old_Whateley?oldid=3657093"
Community content is available under CC-BY-SA unless otherwise noted.