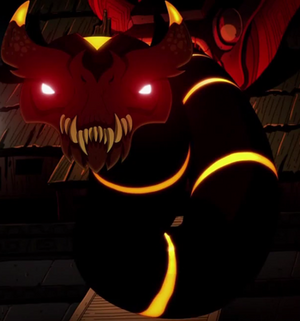 Alright so season 2 of Final Space. In season 2, Gary and the others are revealed to have survived the events of the first season and were rescued by a ship called the Crimson Light. Still mourning over the loss of Quinn, Gary is told by the Titan Bolo that there could be a chance to save her by gathering five artifacts called dimensional keys that they can use to open Final Space. In this season, the Lord Commander is swiftly killed by Nightfall and is revealed to be the possible minion of a Titan known as "Invictus." Along with the returning cast, you have new additions. From season 1, you have Clarence, a greedy, despicable black market tradesman and his adoptive children Fox, a manchild with a machine gun for an arm, and Ash Graven a humanoid alien with telekinetic abilities. Her backstory in particular is what I'll be discussing.

The Serpent God Worthred is a demonic, snakelike entity who is worshiped by the people of Ash's home world Serpentis. The people of Serpentis would gather themselves to be sacrifices of Worthred under the impression that it was a good thing. However, inside of Worthred is a pocket dimension that was created from one of the dimensional keys which serves as his heart. When followers are devoured by the snake god, they are robbed of their wellness which Worthred feeds on, until they were nothing more than zombified husks of their former selves. They are then condemned to eternal servitude to the snake god. Ash's parents collected her and her younger sister Harp to sacrifice them to Worthred. Upon realizing what was to become her fate, Ash panics, but she gets restrained by her parents. She is then forced to watch as Worthred eats her sister. Horrified and distraught, Ash's telekinetic abilities manifest and she kills her parents and some of the cult members in a blind fury. She then flees from the remaining cult members and discovers Clarence and Fox and joins them. From there, Ash vowed that she would never step foot on her home planet again.

Upon realizing that the next dimensional key was on her home planet, she and The Crimson Light arrive to Serpentis to retrieve the dimensional key. After they thin out the thousands of followers to get to Worthred, Ash demands that he release her sister. Worthred refuses stating that she served him well, and decides to swallow her and the crew. From there, there are several shots of different followers becoming emaciated from Worthred's influence, with one asking one of the crew members to put him out of his misery. Eventually, they find the heart and after they have to solve the riddles from the guardian of Worthred's heart, they acquire the dimensional key. Worthred began to fall apart from the inside out, but Ash manages to find Harp. Unfortunately, Harp had spent so much time in Worthred's pocket dimension, she was no longer herself and is unresponsive towards her older sister. Ash is then forced to come to terms with her sister being long gone, and The Crimson Light escape Worthred before his final death throes.

Has it. Nothing indicates that Worthred was made of evil, rather it chose to be the god of evil that the people of Serpentis revere and worship. For its followers...he has no care for them only seeing them as food to glut himself on. And those that become sacrifices to him are in eternal servitude to him.

Feeds on thousands of people and drains them of their wellness until they become mindless zombies of their former selves. When taking into account to what Todd H. Watson did in the second episode, Worthred comes off as worse. At the very least, while Todd did kill dozens of crews to power the electricity in the galaxy, he didn't zombify his victims and doesn't count because of his Freudian excuse.

Retrieved from "https://villains.fandom.com/wiki/User_blog:AustinDR/PE_Proposal:_Worthred?oldid=3204399"
Community content is available under CC-BY-SA unless otherwise noted.