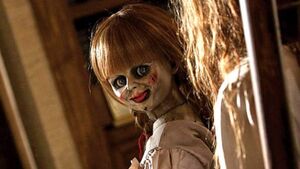 So, I know that Nerd had already made an EP on Annabelle a few threads back on our discuss forum, I feel that there is something new to consider her case.

Let's start with everyone's favorite Demon Nun Valak. The issue? These demons are interchangeable. When it comes to demons and evil spirits, I have this unspoken rule that I try to push: unless the work says otherwise, demons are understood to have moral agency. Like with Valak, he isn't the manifestation of pestilence or defilement. Rather, he/she/it does so out of its own free will. But then....here's the problem. All demons in the Conjuring film series for the most part function similarly; one of their main objectives is to obtain a human vessel or get a soul. Well, that seemed to be Valak's motivation in its origin fil, The Nun; it now seems to do things for shits and giggles. So, the issue primarily appears to be that demons in the Conjurverse are interchangeable to each other. That if you were to put either Valak or Annabelle in the same position, they'd do the same regardless. Hence was my chief issue with the Goblin Lord from Goblin Slayer, though since he was undoubtedly more intelligent than his minions and made stakes with human women, I was fine with him going up despite the goblins are being essentially little, rapist bastards.

I feel what needs to be stated in concerns for Valak is his position. According to the occult book The Lesser Kings of Solomon, Valak was one of the top lieutenants of Hell, having over 30 legions and has the ability tp find treasures. Hence why it bestows Lorraine Warren with a vision of her husband's corpse. This would also explain several of Valak's abilities such as how it was able to keep the spirit of an elderly man from passing into the afterlife in The Conjuring 2. However, despite this, the information mostly serves as supplementary material that while good to know, doesn't really factor much into the films. But already, when you have that idea in mind that Valak has that status, that does mean that Annabelle would be a lesser demon.

What I next wanted to explain was how Annabelle and Valak function. From its first appearance, Valak to me felt more methodical with how it went about screwing around with the family he decided to haunt in the second film what with preventing a man from passing on and forcing him to haunt the family; staging the haunting of Hodgson family; and blocking Lorraine's psychic powers to prevent her from realizing it was the true perpetrator. It also enforces psychological warfare on its victims. With Annabelle, her actions amount to "RAWR, Imma rip your f**king face off!" Thusly, unlike with Valak who seemed to be more methodical with its approaches, Annabelle appears to enforce brute strength, a classic case of brawns over brains.

Body counts...What we know now, Valak did not cause the Amittyville murders like was initially thought. In its origin film, it killed an abbey of nuns with the remaining nun committing suicide to prevent Valak from using her as a host. In The Conjuring 2, it has a few attempts with the Hodgson family primarily when it tried to force the daughter of the family into falling onto a sharpened stake alongside Ed Warren. With Annabelle...she has a pretty sizable body count that I feel stand out because of how brutal they are. With the Mullins, Annabelle pretends to be their daughter when they prayed to anything to allow them to see their deceased daughter again. When the ruse was discovered, it mauled Mrs. Mullins to the point she lost one of her eyes. Later on, it bisects her and crucifies the upper half of her body to the wall. It kills Mr. Mullins by using its demonic powers to contort and bend his fingers back when he tried to fend it off with a crucifix. It tortures Janice, taking advantage of her weakened self, and even makes her kill her adoptive parents in time for the first Ananbelle movie. In that one, it tries to bribe Mia Form by threatening to steal her baby's soul lest she forfeited her own to it, but that leads to Evelyn making the sacrifice.

In Annabelle Comes Home, Annabelle manipulates Daniela into opening up the case it was in. Of course because it was a beacon for other spirits, Annabelle sends many evil spirits such as the Ferryman and the Bride, to kill Judy Warren, Mary Ellen her babysitter, and Daniela as to stop their attempts at trying to reseal it in the case. It has the Bride (a dress that was possessed and causes anyone who wore it to kill their grooms) possess Daniela and tries to tear the soul out of Judy, a young girl mind you. However, it then gets sealed away. It was later temporarily released by Bathsheba Sherman in the first Conjuring film as a means of killing the Warrens and the Perron family. From there, it had a body count of 5 and 8 attempted murders. It also seemed to like extending its victims' pain and agony for as long as it could.

So there is Annabelle for you. I am not advocating that Valak be removed, but I feel like I should mention that the demons in these horror films seem to fall squarely under being interchangeable with what they tend to do. However, I also think that the two are different enough in how they act, and they thus far look to be the worst that the films have to offer. Make of it as you will.

Retrieved from "https://villains.fandom.com/wiki/User_blog:AustinDR/PE_Reevaluation:_Annabelle_the_Doll?oldid=3190129"
Community content is available under CC-BY-SA unless otherwise noted.