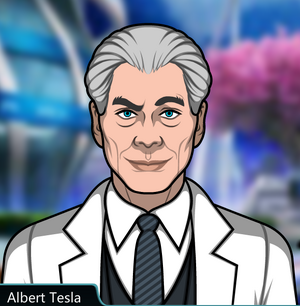 So, irritations aside, here's this blog.

Criminal Case, a point-and-click franchise that starts off being something like a Criminal Minds inspired series before jumping over the shark in its later duration with its ridiculous world-building where apparently demons and monsters are a thing here. Of particular, I will be discussing the Pacific Bay season.

Albert Tesla was a mad scientist who had uploaded his consciousness into a supercomputer back in 1961 after failing 48 times. From there, he became known as the Computer Interface and established the Meteor Systems facility where he wanted to make Pacific Bay "crime free." However, once that failed, he decided that he had to destroy it and assimilate any survivors into his virtual world where he would reign supreme.

He was also responsible for the tragedy that befell the Frank family due to getting them to steal plutonium for him.

Why Doesn't He Qualify?

I admit that I mainly was introduced to the series by Elfen who requested for me to do Ayush Patil, whom I am willing to contest because I am convinced the franchise is reaching Criminal Minds level. But, strictly speaking, from the looks of it, Tesla fails largely in terms of the heinous standard as the series evolved. While he tries to vaporize thousands of people in the Pacific Bay region which comprises of ten districts, apparently other antagonists have terrorized cities and have tried to destroy them in cataclysmic events. So, Tesla doesn't stand out anymore in that respect.

Again, that goes without comparing other antagonists because I personally hate doing that due to different motives and the like.

So, I guess cut. I could potentially look into other cases if there is a continued problem with the heinous standard expanding.