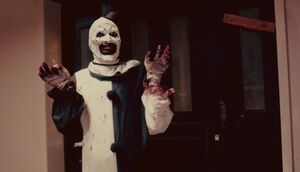 First appearing in The 9th Circle, Art the Clown sits in a train station with a woman named Casey and starts doing annoying gimmicks much to her ire. He then hands her some plastic flowers as if to apologize for his behavior which she begrudgingly accepts. This however proves to be a trick: Art injects her with some substance and whisks her away to some underground chasm where there are more chained women. After she attempts to escape, she is confronted by demons with the lead figure being implied to be the Big D himself. After a pregnant woman gets her womb ripped open, it is heavily implied that Casey gets...violated by the figure.

In the third segment, Art gets kicked out of a gas station for...rubbing his feces all over the walls among other things. This leads to Art gruesomely murdering the gas station attendant and then going after the costume designer. This leads to more bloodshed until Art inevitably captures her and slices off her limbs and the sick clown had slashed derogatory terms into her body. So after this, the babysitter who was supposed to be watching both kids runs upstairs and sees that Art had murdered both children. The film ends with the implication that she will be accused of the murders.

Terrifier, more or less the same. Two young women leave a Halloween party hammered where they have an unfortunate run-in with Art who was now preparing to do his typical chaos, black bag in hand. Art takes a liking to one of them and then gets kicked out of the pizza restaurant for defiling the establishment. Then more gruesome kills, Art eating another woman's face before shooting himself only to come back. Rinse and repeat.

He dresses in a pantomine-inspired black and white costume. His face is painted white with his eyes, mouth, and eyebrows being black. In addition, he has a bald cap and small black hat.

Okay. Art doesn't speak. With that aside, he does very clearly have a personality: he is a violent, psychotic homicidal maniac who has a penchant for gruesomely mutilating and killing all in his path. He has a wicked sense of humor which he demonstrates by cackling silently. He has a general hatred for everything and while his creator states he isn't a misogynist...I don't see how he's not. Given that he writes derogatory terms into that costume designer's body and then...sawing a woman in half from pelvis down...not winning any favors.

I guess I like the character of Art because he does call back to old slashers...but the films he appears in lack much development. Terrifier lacks much in room for characterization and is paper-thin. The main lead are not interesting and are only there to be killed by Art. The scene where he saws one of them in half still rubs me the wrong way. It was disgusting in and of itself. I mean while I do watch horror films where there are grandiose amounts of blood and gore, there was some underlying distaste I had for the scene that took me out of the movie. To be honest...it barely qualifies as a movie IMO. While it has a plot, it is severely underdeveloped and borders on torture porn.

From what I have heard the sequel in development does suggest that more will be known about Art so if it means more plot, then by all means, I'll retract what I said.

So he apparently has a form of immortality and other supernatural feats (even though Terrifier didn't have much implication that he wasn't human). But in particular, he has his arsenal of weaponry ranging from whips, hacksaws, scalpels, etc. Again, I kind of would've liked more circus-themed weaponry in Art's arsenal to have a uniqueness to his kills, but I digress. As a final note, there were some instances of controversy where Art "broke" the Slasher code by using a gun to kill one of his targets.

Retrieved from "https://villains.fandom.com/wiki/User_blog:AustinDR/Villain_Review:_Art_the_Clown?oldid=3844248"
Community content is available under CC-BY-SA unless otherwise noted.