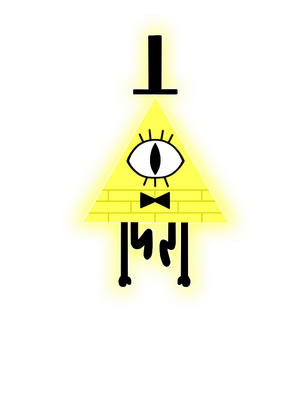 So, from the start, Bill states that he was around for billions of years potentially trillions. He came from another dimension that he claimed was flat. It was maddening. So, Bill "liberated" his dimension by burning it to the ground and killing everyone. From there, Bill escaped his dimension's destruction and took over the Nightmare Realm. From there, he learned of a prophecy of the Nightmare Realm merging with the human realm, thus Bill set into place a millennia-spanning scheme of fulfilling the prophecy.

Seeking those who were attracted to knowledge, Bill had initially tried to create a portal but they ended up not working due to the lack of technological advancements. Eventually, Bill found Gravity Falls where the six-fingered genius Stanford Pines was looking into the oddities of Gravity Falls. He seeks out more information on the town which would lead to Bill meeting and falsely befriending Stanford and assisting him in creating the portal machine. When his business partner Old Man McGucket ends up getting his head sucked into the portal, Stanford realizes Bill's true intentions and shuts the portal machine off.

From there, we know the rest: Bill is summoned into Gravity Falls by Li'l Gideon as a means of gaining the ownership of the Mystery Shack which Bill agrees to, but he would primarily be doing it in a favor for return. After his defeat, Bill returns in Sock Opera when Dipper was desperate enough to make a deal with him in order to get a password on a laptop belonging to the Author. Bill takes possession of his body only to be set back again until we get to the events of the Weirdmageddon arc where Bill succeeds at his plan and bathes Gravity Falls in madness by turning the populace into stone statues; Stanford a golden backscratcher; unleashing bubbles of pure madness, etc. However, he finds out that he needed an equation to get rid of the barrier to further expand his Weirdpocalypse. Along the way, he murders Time Baby and the Time Police after they warn him that his actions would lead to the destruction of reality itself; and trying to gruesomely kill two kids to get what he wants.

But Bill ultimately fails by getting tricked into entering Stanley's mind where he gets erased alongside Stanley's mind by the Mind Eraser gun. Of course if you were to play Bill's gibberish backward, he says "A X O L O T L! MY TIME HAS COME TO BURN; I INVOKE THE ANCIENT POWER THAT I MAY RETURN!!" before he gets punched out of existence by Stanley. With Bill's physical body being the only remnant of him, it could indicate that he is not completely gone.

Bill is a delightfully entertaining villain who openly acknowledges that he is insane. He can come off as wickedly hilarious such as when he pulls a deer's teeth out with his powers to give them to Gideon, or creating a screaming head in his second appearance. He comes off as energetic and sometimes annoying which he obviously does to mess with the people he wants to make deals with. This in itself is a facade that hides his true self that being a sociopathic Lovecraftian horror whose one goal is to create a world with no rules or restraints. Even though it is made apparent that making a world of chaos could destroy reality, Bill does not care instead seeing destruction itself as being a game. Alex Hirsh himself said it best that despite being infinitely older than the universe, Bill never grew up during that time.

Bill has a plethora of powers at his disposal. He can enter people's minds through their dreams and even manipulate them to an extent. However while he is nigh-invinvincible in the dreamscape, he cannot influence the physical world hence why when he makes deals with people, he uses their bodies as a vessel. Even then, he can be too weak in that form such as when he ends up becoming weak while inhabiting Dipper's body in Sock Opera. Once he merges both realms, however, he is able to use his full power to warp reality and obliterate Time Baby.

But there are weaknesses. For one, he cannot enter someone when the deal isn't struck and even in the dreamscape, he is subjected to being weakened or outright killed within it as shown when the Mind Eraser gun is used on Grunkle Stan.

Powers aside, Bill is also a very intelligent schemer and manipulator. He uses people's desires to make the deal sound more sweet to them and even if that fails, Bill os able to adapt to that setback. However like with most villains, he is suffers from being highly arrogant and not taking his enemies as legitimate threats until his defeat.

His design befits his nature. As a triangle with a top hat and bow tie, Bill looks cartoonish in opposition to the other characters' styles. In some ways, Bill's appearance reminds me of those 1930s cartoon characters the style being named "Rubber Hose." As such, it compliments Bill's otherworldly nature and adds to his unpredictability.

Overall, a very entertaining villain who craves destruction and chaos for its own end. I am giving Bill a 9/10.

Retrieved from "https://villains.fandom.com/wiki/User_blog:AustinDR/Villain_Review:_Bill_Cipher?oldid=3835233"
Community content is available under CC-BY-SA unless otherwise noted.