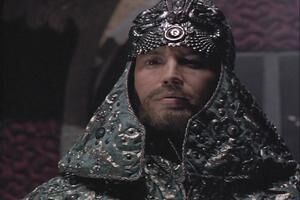 Who are They? What Have They Done?

Shiwan Khan first awakens from a metal sarcophagus in the New York Museum of Natural History, upon which his first act is mind controlling the observing security guard to shoot himself in the head. He escapes and has a taxi drop him off on the streets, but not before controlling the driver to ram a gasoline truck and blow himself up to not have the location recorded, while laughing maniacally at the destruction.

As Lamont Cranston/The Shadow is informed of the guard's death at his secret base, Khan enters and addresses Lamont as Ying Ko, his former drug warlord identity, and admits that he was also a student of the Tulku, but his teachings failed to redeem him. He offers the fellow psychic to join him in his plan to rule the world, as his ancestor Genghis Khan nearly did once, but Lamont refuses to work with the villain. Shiwan rallies his soldiers in preparation. The Khan then hypnotizes Reinhardt Lane, a scientist working for the United States Department of War and the father of Lamont's love interest Margo, into constructing for him what is essentially an atomic bomb.

A squad of his soldiers are sent to physically receive the bomb shell, but the Shadow defeats all of them. The Khan controls Reinhardt to call Margo to his laboratory in order to hypnotize Margo. She is given the command to assassinate the Shadow, but she misses the shot at his apartment and Lamont breaks her from her trance. Lamont then tracks the Khan down to a Chinese restaurant, who reveals his goal was for Cranston to kill Margo in self-defense, and that he killed the Tulku after stealing his mystical dagger, the Phurba. A henchman holds Lamont at gunpoint in one last attempt to force him into joining, but the Shadow's telepathy overcomes him and Shiwan escapes, seemingly disappearing into an empty lot at Houston and 2nd Avenue.

The Khan is next seen at the Empire State Building with Reinhardt informing him of how destructive the bomb will be, when a man passing by insults his outfit; for this Shiwan forcibly mind controls him into jumping off the building. After this, Shiwan celebrates the delivery of the beryllium sphere needed to complete the bomb by Farley Claymore, his only accomplice by free will, but ruthlessly threatens Claymore to remind him of his place, before publicly threatening to destroy New York City with the bomb unless his demands for power are met. Lamont and Margo figure out his hideout in the empty lot is an abandoned hotel invisibly cloaked by hypnosis. Khan sets the bomb to detonate in 2 hours, and realizing Claymore can replicate its design himself if needed in the future, has Reinhardt imprisoned for lack of further use, intending to have him die in the explosion, while planning himself to escape with an airplane. The Shadow fights his way into the building, getting past Claymore before finally battling Shiwan, who initially overwhelms the hero with the Phruba, but Cranston manages to control the blade, forcing Khan to flee into a mirror room. As Reinhardt and Margo defuse the bomb, The Shadow follows Khan and breaks all the mirrors with his powers before launching a glass shard directly into Khan's head.

Khan then awakens in a straitjacket, where he tries controlling a doctor to escape, but is told that his frontal lobe was partially surgically removed to save his life, neutralizing his hypnotic abilities. Shiwan Khan is then locked in his padded cell, where his objections melt into background noise with the yells of the other mental asylum patients.

The only other villains not under his command are Duke, a minor mafioso villain with one attempted murder on-screen, and Ying Ko/Lamont himself before redemption, who is implied to have raided a village, but only 3 or 4 of those kills are on-screen. However, Shiwan attempting to destroy New York City (which had a 5,000,000+ population in the 1920s) with an atomic bomb in order to rule the world, and being willing to use more nukes if necessary, is beyond all of them. Killing at least 4 people through psychic-assisted suicide is also uniquely awful, especially the guy he forced to jump off a building confused and begging to come down.

His politeness to Lamont is manipulative pragmatism to get his power on his side, and rudely subverted after their second encounter when it becomes clear he is no longer a ruthless monster like him. His treatment of Claymore, threatening him and calling him an idiot, makes an example of how little he respects willing allies. Also displayed is how he stabs one of his soldiers and calls him a weakling for failing to kill Lamont, showing how little he cares of them as well.

I think he could warrant a yes.