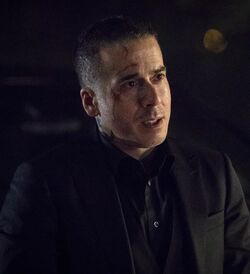 The article about Ricardo Diaz from the TV series Arrow was already categorized as Pure Evil via a PE Proposal. However, that was before the midseason finale of Season 7, several episodes before his death. With some updated information following the previous proposal, this blog post is to ultimately decide if he can still kept or if he should be removed.

Arrow is the TV series produced by The CW network and was the show that kicked off the Arrowverse and started the creation of fellow shows The Flash and DC's Legends of Tomorrow. The main character was Oliver Queen and over the course of the show, he goes between relationships, revealing his identity to his loved ones, forming a team of vigilantes and facing off against villains in his mission to protect Star City. One of these villains includes Ricardo Diaz, who is the main antagonist of Season 6 and the secondary antagonist of Season 7.

Who is Ricardo Diaz?

Ricardo Diaz is a powerful criminal mastermind under the alias "The Dragon" who was known for being cunning, ruthless, psychopathic and had no regard for anyone he hurt, killed, manipulated or attempted to kill. He started out in the series as a simple drug lord who teamed up with hacker leader Cayden James in the latter's pursuit to avenge his son's death, before he was later revealed to be the one pulling his strings and cunningly rose to become the city's greatest underworld kingpin through bribery and intimidation. After his defeat in Season 6, he returned as a terrorist and intended on destroying Star City, kill Team Arrow and Oliver Queen's family, all because they removed him from power. He was eventually killed in prison by the Season 7 big bad, Emiko Queen.

What has he done?

Diaz's greatest motivation was to become the most powerful, feared and respected criminal kingpin in Star City. He slowly worked his way up the underworld by working as a member of the criminal group Scorpions before defecting. To gain profit, Diaz developed drugs to sell on the streets to customers, which included John Diggle. Wanting to drive a wedge within Team Arrow and Oliver Queen's role as mayor, Diaz hired an assassin to kill hacker leader Cayden James' son and forged security footage to make it look like Oliver was responsible. He then joined Cayden in his pursuit for vengeance, that resulted in the deaths of countless innocent people as well as criminals. During this time before betraying and killing Cayden, he quietly got several city officials on his payroll and threatened some of each of their loved ones to ensure their compliance.

Wanting to expand his power beyond the city, Diaz joined the Quadrant, a syndicate of the country's most powerful criminal organizations after killing one of their leaders and son so he could secure himself as the replacement. After this, he had his men hunt down and kill the Scorpions, his old associates. During the season, Diaz intended on getting Oliver imprisoned. So, he leaded a forged image of Oliver being the Green Arrow so he could get indicted. Later, he kidnapped and tortured Roy Harper so would testify. Then, he drugged Oliver so he would spiral down into his old murderous habits, that would also publicly get him impeached. To ensure that Team Arrow would turn on Oliver in trial, Diaz kidnapped and threatened to kill Rene Ramirez's daughter so he would comply. He then intended on ensuring Black Siren testifying as Laurel Lance, even by abusively threatening to hurt her and Quentin Lance.

After she betrayed him and the case dropped, he lost more of his sanity and declared war on Team Arrow by having his men openly attack them in their own homes and even publicly in the hospital. Growing more paranoid, he angrily threatened Anatoly Knyazev and then killed two of the other Quadrant leaders before intimidating the fourth into handing him full control of the syndicate. In the Season 6 finale, Diaz tricked the team and some FBI into entering a warehouse filled with explosives in his attempt to kill them. He then threatened to kill Siren so Quentin would send away the FBI, but was unable to after ruthlessly killing Quentin when he saved her life.

After escaping, Diaz returned and attempted to kill Oliver's wife and son, Felicity Smoak and William Clayton. He then led the Longbow Hunters to steal compartments of a battery for a nuclear device, while he also stole a drug to achieve enhanced strength and drug resistance. After kidnapping Anatoly and killing his fellow Bratva members for his betrayal, Diaz attempted to use the nuclear device to destroy Star City since he couldn't take control of it before being apprehended. At the Slabside Maximum prison, he threatened to kill visitors (including families) while talking to Oliver before leading a riot that killed countless security guards. On the radio, he sadistically killed a guard while Oliver was forced to listen and then later calmly watched as the inmates torture many other guards. He then used a device to set the prison on fire and nearly killed many other prisoners who followed him. After being becoming an A.R.G.U.S. asset, Diaz (unaware that he was in a simulation) attempted to escape from custody and kill Curtis Holt along with other A.R.G.U.S. agents. After Diaz went undercover with Diggle and Lyla Michaels, Diaz dishonoured his deal with A.R.G.U.S. and warned terrorist Dante about the ambush, which resulted in him being locked up again.

Initially, it appeared that Diaz was honourable, had genuine feelings for Earth-2 Laurel Lance, had a tragic background and was an overall reasonable man. However, as the series progressed, the opposite was confirmed. During his old-fashioned arena fight with Oliver for control of the city, he cheated by stabbing him with a knife before dishonouring his own end of the deal by having him arrested by corrupt cops and his trial moved up. He displayed a more abusive behaviour around Laurel which is similar to Frank Underwood in House of Cards and Clifford DeVoe on The Flash with their spouses, while he would constantly call her "baby" after her betrayal. These factors were never justified his background for growing up as an orphan, and it is further unjustified after he cruelly lit his childhood bully on fire. During Season 7, Diaz would endlessly antagonize Felicity after his attempt to kill her while also calling her "sweetheart" and "honey" and saying that she doesn't belong at the "big boys table", all pointing to him being a misogynist.

I think he is still a keeper.

Retrieved from "https://villains.fandom.com/wiki/User_blog:IamLucifer69/PE_Keep_Proposal_-_Ricardo_Diaz_(Arrowverse)?oldid=3193424"
Community content is available under CC-BY-SA unless otherwise noted.