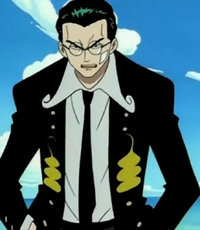 Starting off with 2020 is Captain Kuro from One Piece, a man who cares about nobody except himself. He's also an antagonist that rivals other One Piece villains who are also Pure Evil, but what makes Kuro stand out might interest you. Forgive me if I barely know him much, as it has been a long time since I watched One Piece. Here we go!

Captain Kuro was the leader of the Black Cat Pirates and a former caretaker of Kaya. He's extremely intelligent as he is dangerous. Why, you ask? Simple, really. He isn't called Kuro of the Plans for nothing. He wanted Syrup Village for himself, even going as far as to completely kill his own crew in a heartless manner, not just the poor villagers by terrorizing them. And if he was given the chance, he would've killed Kaya as well had Luffy not defeated him.

He even viewed Usopp as an obstacle and even frame him for the actions he obviously never caused, making said villagers turn a blind eye and view Usopp as a threat instead. Even though Kuro did showed signed of restraint during his days, he wanted nothing more than to take over the village for himself, showing no qualms to innocents and his own crew members alike.

By far one of his worst actions were not only terrorizing the villagers with the intent of killing them including Kaya, he also murdered his own crew members in cold blood, which shows that he cares about nobody except himself. He may be highly strategic and cunning, but he wouldn't hesitate to run right into your path and just slice and dice you to death before you'd even blink. He even had a breakdown when his plans were foiled by Luffy, which led to his ultimate downfall.

To top it off, he also framed Usopp into making the villagers think that he's the criminal.

Whatever goodness Kuro has left is long buried to the ground and isn't really the most compassionate fellow there is, especially when he served as the captain of the Black Cat Pirates before murdering his own crew members in cold blood. He only served Kaya as a butler before descending towards villainy, even forming a crew (and disposing it) just to take over Syrup Village, even if it meant leaving a trail of bloodshed while making said villagers view Usopp as a threat. Kuro is as selfish as he is dangerous and murderous combined.

An obvious yes from me. Apologies if the details are a little bit vague, it has been a long time since I watched One Piece, and it felt like years ago too. And for the people, your choice means your vote as well!

Retrieved from "https://villains.fandom.com/wiki/User_blog:JonTheVGNerd/PE_Proposal:_Captain_Kuro?oldid=3476645"
Community content is available under CC-BY-SA unless otherwise noted.