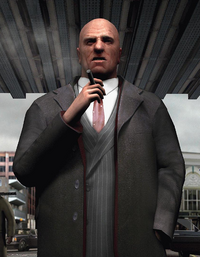 Back at it again, this time we bring you a ruthless mobster known as Charlie Jolson from The Getaway. Responsible for kidnapping Mark Hammond's son, even going as far as to blow up a cargo ship with everyone with everyone in it, himself included, this is one mobster that's not to be trifled with. Without further ado, let's get the PE going.

A little side note; this page definitely needs improvements, including trimming down walls of texts so that they can be read through easily, as well as more images (and even trivia) to further improve the quality so I don't have to do everything myself. Just a heads up is all.

Charlie Jolson is the main antagonist from The Getaway, and serves as the Head of the Bethnal Green Mob. He was also responsible for kidnapping Mark's son, Alex Hammond and forced him to work for Charlie Jolson, or risk having his son killed, especially after his wife was murdered during the kidnapping, as means of blackmailing the poor ex-con. He even played both sides against the middle involving both the Yardies, Collins gang and the Triads into tricking them that he has Mark Hammond for the taking.

He was also a womanizer too (Yasmin was never romantically interested in him), and despite his age, he isn't easily fooled and saw through that disguise, imprisoning both Mark and Yasmin before being freed by Frank Carter, a former cop who was fired after the chief of police was found associated with Charlie Jolson, including obvious corruption. And when he was exposed for his actions by blackmailing Mark to do his dirty work, all eyes were on him. And what happened next? Simple. Villainous breakdown.

Charlie isn't your average mobster. He sets the bar high when it comes to having heinous standards. Ranging from kidnapping, to blackmail, and becoming a full-blown suicidal terrorist when it comes to being exposed for pulling the strings on the other gangs into inciting a gang war by an unwilling Mark Hammond, who was forced to do all the dirty work.

Furthermore, he obviously threatened to kill Mark's son if he does so much as try and tell anyone about it and he lets his men do the work for him and brutally roughen Mark up, especially with the mention of his son. And later on during a final confrontation inside the Sol Vita cargo ship, after Mark's explanation on how he's been used, the cat was soon out of the bag. Despite Charlie scoffing off at Mark for speaking out the truth, he was exposed for pulling the strings on all the other gang members into wiping each other out, all of which were orchestrated by Charlie himself with the help of an unwilling Mark.

Having said that, he turns himself from a mobster to a suicide terrorist, wanting to bring each and everyone down with him inside Sol Vita, which shows his true colors of his dangerous nature beyond belief, all while singing Land Of Hope And Glory at the same time. And only a few had escaped (even Jamahl escaped, as is Yasmin, Mark and Alex Hammond, along with ex-cop Frank Carter), whereas everyone else were killed inside the explosion.

And a side note is that if Mark were to have indeed succeeded in working for him, Charlie will have eventually killed him and the kid (and likely Yasmin) anyways, because his usefulness will have expired, assuming Mark would have wiped the gangs himself.

Mobsters like Vito Scaletta may have redeeming qualities, but not Charlie Jolson. He wanted full control of London by having other gangsters eliminate themselves. But that's not the worst part. He kept his word that if for any reason Mark refuses to work for him, he'll kill Alex in cold blood. And he extorted others too, along with having blackmailed other people too, rival gangs included. And he even went as to completely blow the whole cargo ship with everyone inside, himself included, which further shows his discontent towards society.

If, and I mean if, Charlie Jolson had any redeeming qualities, is that he only cared about smoking cigars, being inside classic cars, and wearing flashy suits. Yes, he's had plenty of respect by his own men, but even then, he only cares about himself and his lackeys following his orders.

This is one mobster that rivals that of Alejandro Sosa, only except Alejandro wasn't suicidal and isn't that old, but he was still evil beyond belief because he didn't cared if the journalist and his family was killed. For me, this was a similar case for Charlie Jolson's acts by murdering Mark's son if he didn't followed his orders.

To me, this is a yes, especially after given a clear explanation about his heinous actions. As for the people, it's all up to you to see if he is deemed fitting or not.

Retrieved from "https://villains.fandom.com/wiki/User_blog:JonTheVGNerd/PE_Proposal:_Charlie_Jolson?oldid=3479230"
Community content is available under CC-BY-SA unless otherwise noted.