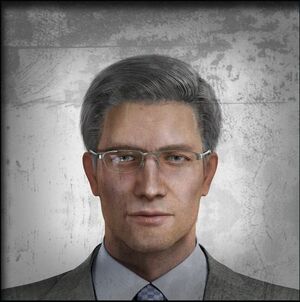 Yep, yet another PE for the taking, and we bring you Frederic Downing from Resident Evil: Degeneration. He was responsible for unleashing the G-virus at Harvardville Airport, resulting in a zombie apocalypse, and even selling the virus in the black market. He may not have the combative strength from the likes of Albert Wesker, but who needs to get physical when you have Frederic just letting the virus loose with the intent on putting humanity on the brink? Let's get to it.

What is the work/Who is he?

Resident Evil: Degeneration (Biohazard: Degeneration in Japan) is a biopunk-action animated movie directed by Makoto Kamiya, with Leon S. Kennedy and Claire Redfield as protagonists, with Frederic Downing as the main antagonist. And Frederic Downing was an employee of Umbrella Corporation and later the head researcher of WilPharma Corporation, also responsible for creating the G-virus that has deadly effects on a human, often resulting in zombification. Not only that, he stole both samples of the T-Virus and the G-Virus when the Raccoon City outbreak occurred.

Frederic does start off nice and intelligent at first, but his true colors were very obvious, and he cared nothing more than to gain his personal wealth on doing research on humans that yielded dangerous results, and was even willing to sell the samples in the black market and expressed little to no concern about humanity.

One of his biggest and most heinous acts were unleashing a virus by infecting a passenger inside the airplane, and within Harvardville Airport when the zombie outbreak was unleashed. Not only did he caused bio-terrorism, but he also had shady deals with an unknown caller (presumably Ron Davis) in order to sell the virus samples he created (or stole, take your pick) to the black market.

He may be cowardly, but he's still a very dangerous individual. And he certainly needs no fighting skills to unleash a zombie apocalypse.

Beneath his friendly demeanor, Frederic sees humans as mere tools or test subjects when it comes to being a researcher. Therefore, he doesn't express any form of sympathy to unfortunate victims who succumb to their illnesses and bring back to life as the infected undead. And although he can be quite scared when the truth is exposed, one should never underestimate Frederic when it comes to inhumane researches, especially while being the head researcher of WilPharma.

Think Albert Wesker was bad? Then Frederic might be the one who can still wreak havoc, had Hardardville Airport not been successfully contained by the military. To me, it passes as a yes. As for the rest of the people is entirely up to your vote.

Retrieved from "https://villains.fandom.com/wiki/User_blog:JonTheVGNerd/PE_Proposal:_Frederic_Downing?oldid=3452355"
Community content is available under CC-BY-SA unless otherwise noted.