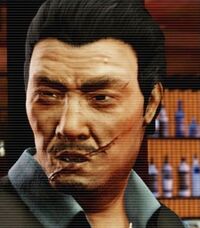 Here we are again with another PE Proposal, with the ruthless Sun On Yee leader Henry "Big Smile" Lee from Sleeping Dogs. Yes, he has a family and a daughter, but of the crimes he's committed makes you rethink of his otherwise sympathetic actions. Let's get to it, shall we?

Henry "Big Smile" Lee is the leader of the Sun On Yee and the main antagonist in Sleeping Dogs, also responsible for smuggling drugs throughout the continent and enacting on contract killings. But that's not the worst part. He also forced women into prostitution for his own profit, and was known for his torturous methods on his victims, going as far as to bury them alive. Even other triads are disgusted and afraid of his actions and wouldn't even go near them.

He is also incredibly foul-mouthed, but he's also a seriously dangerous individual who isn't afraid of killing those who turn on his back, or those who end up crossing paths if unlucky enough. It was evidenced when he kidnapped Jackie Ma and had Tong torture and disembowel him in the most gruesome manner. This is one triad leader not to mess with. Ever.

He forced women into prostitution for his own, personal gain, had savagely tortured other victims and buried them alive. And because of his brutal actions, other Triad gangs wouldn't even go near him without risking their lives taken. He even found Tong to be his useful right-hand man in doing the work for him to completely mutilate Jackie Ma. And he was hell-bent on inciting a full-blown civil war within Hong Kong, just to make a statement. And he was shown to show no respect to other triad gangs, and he doesn't possess any sort of honor or loyalty as leader of the Sun On Yee.

Yes, Big Smile Lee does show genuine care about his family, including his own daughter, yet that's essentially two sides of the coin of what he is. He isn't just incredibly bad-mouthed, he doesn't show any respect to his own members, not even to the other triad gangs, and is shown to be incredibly dangerous. If he did cared about his own daughter, he would've put her in the same position for prostitution, meaning he's a twisted kind of father who, if he weren't killed by Wei Shen, would've succeeded as kingpin and even use his own daughter as a slave.

This is a tough one to crack. Again, Big Smile Lee did care about his family and daughter, but that's the gist of it. In reality, he is feared by many of his rival gangs, his own members included. And he had Tong as his most valuable asset when it comes to brutal killings. To me, it'd be a yes because of the actions explained. As for you people, you're more than welcome to vote if you see him as fit or not.

Retrieved from "https://villains.fandom.com/wiki/User_blog:JonTheVGNerd/PE_Proposal:_Henry_%22Big_Smile%22_Lee?oldid=3493317"
Community content is available under CC-BY-SA unless otherwise noted.