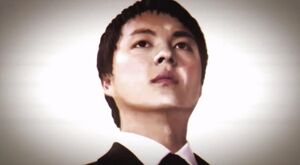 Back once again and our next PE candidate for the day is Kim Jong-un from Homefront. And don't let his appearance fool you; he looks absolutely NOTHING like his real-life counterpart. This version of Homefront is far radically different than his real-life counterpart, and while he doesn't appear at all in the sequel, his actions are just as scary as any other totalitarians, especially when it comes to achieving global domination.

Without further ado, let's get this proposal started!

Homefront, and its sequel Homefront: The Revolution, are first-person shooter games developed by Crytek and THQ (not THQ Nordic, but THQ, a US gaming company before being defunct). Set in an alternate reality of real-life, players are tasked to take back not only America, but also parts of the world from the Greater Korean Republic.

Kim Jong-un is the son of the late president of North Korea (or Korea DPR), and ruled his country with an iron fist before he began to aggressively annex other countries including Japan (whereas Malaysia voluntarily joined), all while the economy in the US was in serious turmoil. And it didn't took long for Kim to start an all-out attack against the weakened US and began taking over a large part of it, Alaska and Hawaii included.

While he doesn't appear in the sequel, it seems his forces went into greater lengths in crossing the irradiated river by taking control of the eastern portions of the States. And for whatever reason on why he doesn't appear is more than likely because he went into hiding and went completely unpunished for his actions.

From having taken complete control to other countries, mainly in the Asian regions including Japan after Japan had faced a lose-lose situation against the Greater Korean Republic, to having seriously decimated the United States with an EMP attack that led to the US to succumb to Kim's monstrous tyranny by claiming it to be a "message of peace to the entire world", and his troops, millions of them too as a result of recent annexations, makes the Helghast Military look like total chumps, especially when it comes to acquiring a large vast of resources in order to strengthen his military force and become near-unstoppable.

And Kim himself uses his charismatic knowledge by deceiving his people into claiming that their lives are a major improvement since the USA, now known as New Korean Federation of Occupied America, when in reality, he is enslaving the people through hell and back, and even have them executed at will. Additionally, he is a dangerous individual who is never seen and since he doesn't appear in The Revolution, it's likely that he went into complete hiding, voiding any form of punishments or repercussions of his horrendous actions.

He expresses no sympathy or concern to others, and being a brutal dictator shows that he is never to be taken lightly when it comes to having a full, military force in his arsenal, wanting nothing more than global domination, save for perhaps a chosen few who are spared from Kim's relentless annexation to other nations. And he even brainwashes people, his own citizens included, as to look up to him as a hero, or a far more twisted one, so to speak. He is an ally of no one except himself, and with his military backing up, his fate is 100% ambiguous, and it's likely that he remains alive to this day, succeeding his heinous deeds.

A big yes for me. He is far different than his real-life counterpart, especially given how they look entirely different from one another. As for the rest of the people, all up to your votes.

Retrieved from "https://villains.fandom.com/wiki/User_blog:JonTheVGNerd/PE_Proposal:_Kim_Jong-un_(Homefront)?oldid=3558281"
Community content is available under CC-BY-SA unless otherwise noted.