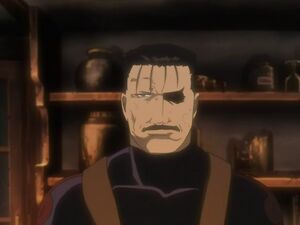 Two PE Proposals from the same franchise, this time we bring you Pride, or King Bradley, from the 2003 version of Fullmetal Alchemist. Unlike the Pride from Brotherhood, this version is far different than his later counterpart and as his name implies, he takes pride and joy in expressing total hatred towards humanity while assuming his role as Führer of Amestris. Despite his cheerful nature, he's a complete murderer underneath the mask, especially when it comes to killing his own family in cold blood. Without further ado, let's begin the proposal!

NOTE: This will be my last PE Proposal until further notice, reason is not given for said decision. Just a heads up is all.

Unlike the Brotherhood version, the 2003 version of Pride is far more cruel and bloodthirsty, all while assuming his role as Führer of Amestris beneath his fake smile. And of the crimes he's committed, his worst of these crimes weren't just inciting the Ishval Civil War (while Envy was the one who did it in the manga version) just to protect the Philosopher Stone for Dante, but went as far as to murder those he comes across, his own family included. This makes him a far more frightening individual matched only by Envy, also a fellow homunculi.

Pride's worst crimes weren't just inciting a civil war, but had also murdered his own family, including his own son, Selim, in cold blood and showed zero remorse in committing these atrocious acts. Worse yet, he was enjoying himself in tormenting Roy Mustang in his fight, showing how little he cares about humanity and isn't shown in wanting to become human himself. Sure he can be charming around public, but deep inside, he cares little about anyone regarding humanity.

When it comes to having a friendly face only to be killed by Pride afterwards shows that he's a murderous and sadistic monster, going as far as to completely kill Selim, his own son, out of spite. It shows that these kinds of parents aren't always protective of their young and will gladly dispose of them whenever they want to or not (just ask Ego, or even Sweet Tooth from the later incarnations).

And with a sizeable body count, Pride is nowhere near sorry when it comes to murdering his victims, including his own wife and son.

Absolutely yes. Given the large scale of crimes committed, its hard to not say no to Pride and his gruesome actions. As for the rest of you guys is entirely up to you.

Retrieved from "https://villains.fandom.com/wiki/User_blog:JonTheVGNerd/PE_Proposal:_Pride_(FMA_2003)?oldid=3564813"
Community content is available under CC-BY-SA unless otherwise noted.