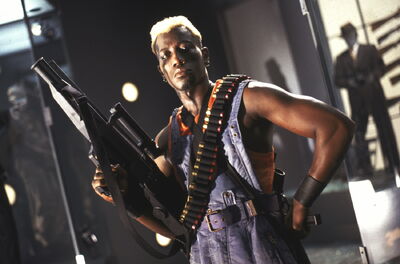 Oh yes, two proposals at once. This time we bring you Simon Phoenix from Demolition Man, a deadly fugitive and arch-nemesis of famed super cop John Spartan. And after years of cryosleep, Simon was looking to turn San Angeles into a crime-ridden society by his hands. Without further ado, lets get the proposal going!

What is the work?/Who is he?

Demolition Man is a sci-fi action film directed by Marco Brambilla, with John Spartan the lead protagonist, and Simon Phoenix the main antagonist. Simon Phoenix was a psychopathic crime lord who takes serious delight in committing heinous crimes, and was still doing so in 2032 from being cryogenically frozen alongside risk-taker officer John Spartan, and won't stop at nothing from turning San Angeles into his own, twisted image.

His worst actions were blowing up a building with C4 charges that resulted in killing of all 30 hostages inside the building. It shows how ruthless Simon is when it comes to committing the worst of crimes, and still does so in 2032 after being frozen for years alongside John Spartan upon being found guilty. He even recruited and defrosted other gang members for them to join up to resume life of crime and kill Raymond Cocteau in the process.

While he does take serious pleasure in tormenting and killing other victims (one instance was killing John Spartan's friend, which had been deleted due to time constrains in the film), he's incredibly smart and cunning, but he's also impulsive and dangerous when encountering John Spartan once again. The end result was him being cryogenically frozen, resulting in decapitation and erasing from existence after the damaged equipment explodes within the room.

While he did called out on Raymond for turning San Angeles into "sissy-land", that doesn't stop Simon from committing heinous acts, and isn't even the least bit of sorry for his actions, especially in having killed hostages prior to being frozen for years. He simply considers heinous acts as a hobby of the sort, unless he encounters John Spartan is where he takes off his gloves and just shows how bloodthirsty Simon Phoenix is.

Absolutely. Simon's actions should be deemed fit for it. As for the other people, all up to you to vote to see if Simon qualifies or not.

Retrieved from "https://villains.fandom.com/wiki/User_blog:JonTheVGNerd/PE_Proposal:_Simon_Phoenix?oldid=3477949"
Community content is available under CC-BY-SA unless otherwise noted.