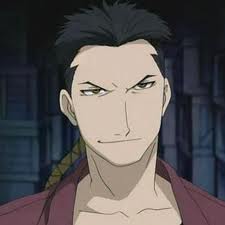 So, with yet another PE Proposal is none other than Solf J. Kimblee from the 2003 version of Fullmetal Alchemist, and this individual differs from his Brotherhood counterpart. This 2003 version takes extreme joy in murdering his victims, even inciting wars, and he's proud to be a psychopathic sadist, which makes his Brotherhood counterpart far more nicer. And the list of crimes committed rivals those of other Pure Evil FMA villains which shows how dark and brutal the nature of the show is.

Anyways, let's get the proposal going!

Solf J. Kimblee is, to put it simply, a mass murderer, and he loves every single bit of it and doesn't show any kind of compassion when it comes to torturing or breaking his victims out of sadistic entertainment, even turning living (and non-living) organisms into bombs, though he does this to humans because he finds them far more entertaining. And in taking part of the war is where he started to rack up his body count for the thrill of it, women and children included. That's when you know that the 2003 adaptation was far more brutal than the Brotherhood version.

Kimblee sets the bar high when it comes to heinous standards. He doesn't just kill his victims by placing bombs and blowing them up to kingdom come, he takes serious pleasure in torturing his victims, physically and mentally. While Kimblee did worked for Greed and his chimeras, he isn't shown to be a trustworthy ally especially if he were to backstab them later on, in which he does so in the end, much to the disgust of both Greed and the chimeras.

And even in his imprisonment didn't stopped Kimblee from doing what he does best; cause a killing spree just to satisfy his endless bloodlust. And when he was joined in the military, Mustang was rightly appalled yet was unable to take action due to King Bradley (then known as Pride) having promoted Kimblee despite his sadistic nature.

And he uses his role as a military just to kill countless civilians for kicks, because simply put, he finds killing people far more fun than dealing with everyday criminals.

He doesn't show any kind of sympathy of the victims he's killed and takes extreme joy in torturing and committing mass murder and isn't afraid to admit it. For him, killing his victims, be it from the Civil War or outside of it, is nothing more than just a lifestyle. And for Kimblee, he just loves the sight of bloodshed being rained down upon, and does so with a wicked smile on his face. Literally.

Given his atrocious actions in committing mass murder for his own sadistic entertainment and with a sizeable body count to go for, it's a definitive yes for me. For the rest of you people, your vote means your choice on whether he fits or not.

Retrieved from "https://villains.fandom.com/wiki/User_blog:JonTheVGNerd/PE_Proposal:_Solf_J_Kimblee_(FMA_2003)?oldid=3564811"
Community content is available under CC-BY-SA unless otherwise noted.