Kill all the humans (all failed)

The Big One (nicknamed by Robert Muldoon) was the alpha-female of the Velociraptors in Jurassic Park, as well as the main antagonist of the movie.

In the beginning, eight Velociraptors were bred on Isla Sorna. A few months after hatching, the Raptor pack was transported to Isla Nublar, the site of InGen's (upcoming) Jurassic Park theme resort.

The Big One assumed her dominance after killing five of the other seven Raptors, commanding her two remaining subordinates to attack the security fencing. Muldoon claimed that in comparison to the other members of her brethren, the Big One had an extremely high problem-solving intelligence, remembering the location of certain weak spots in the fencing and where feeders would come to feed the animals. As a result, an automated feeding system had to be installed on the holding pen.

When the Big One was being transferred to the holding pen, she lashed out inside the cage, sending it backward and caused Jophery Brown, the gatekeeper, to fall over. Despite the best efforts of Robert Muldoon and the security team, the Raptor was able to pull the gatekeeper into the cage and kill him.

Jophery's death raised a number of safety issues, as well as a twenty-million dollar lawsuit against InGen. In order to calm his investors, John Hammond invited Ian Malcolm, Dr. Ellie Sattler and Dr. Alan Grant to come down to the park for the weekend, hoping they would approve of the park's security measures.

When the power was cut by Dennis Nedry during the Isla Nublar Incident, Nedry's computer confirmed that the Raptor pen was still active, as Nedry knew full well how dangerous the Raptors were.Later, when the staff decided to reboot the power to purge the computer system of Nedry's virus, it inadvertently shut down the fences in the Raptor's holding pen as well. Unknown to the survivors, the three Raptors broke out of confinement. The Big One sent one of her subordinates to find and kill John Arnold when he went to Maintenance Shed alone to reactivate the power grid. When Arnold failed, Sattler and Muldoon tried to complete the task. With the aide of her other subordinate, the Big One lured Robert Muldoon into an ambush, and when he least expected it, she jumped out and wrapped her jaws around his head, just after saying his very famous last words.

The Big One and her subordinate then made their way to the Visitor Center, where they stalked Lex and Tim. The Big One displayed her intelligence here by successfully opening the door to the kitchen, where the two children had taken refuge. The Big One was knocked unconscious by Lex, who tricked her into running into a metal cupboard door. The subordinate was locked in the kitchen freezer, but the Big One quickly regained consciousness and followed Lex, Tim, Alan Grant and Ellie Sattler to the control room.The Big One attempted to enter the room, but Lex activated the door locks, forcing the alpha-female to break in through a window. Before she busted through, she was shot at by Alan Grant with a SPAS-12 shotgun three times before it jammed. Luckily, the survivors escaped through the air vents.

Meanwhile, the Raptor that killed Arnold had managed to free itself after Sattler shut it in the maintenance shed, due to their knowledge of how to open doors.

The Big One continued to chase the survivors down to the main lobby. There, she met her remaining subordinate and the two cornered their prey. The subordinate was just about to attack when Rexy suddenly appeared and killed her. Enraged, the Big One pounced on the T. rex to avenge her subordinate and started clawing and biting at Rexy, but eventually Rexy managed to shift and shudder, and ultimately caused the Big One to slip into her jaws. The Big One is then thrown into a decorative model skeleton by Rexy, killing her instantly if the bite-force of the T. rex did not kill her first.

Rexy received a number of deep flesh wounds from this attack, which healed into scars and can be seen clearly in Jurassic World.

In Jurassic Park III, the Big One's legacy is continued through Alan Grant's fascination with Raptor intelligence. He theorized that they were more intelligent than modern mammals, such as whales and primates.

Her severed foot is seen in Jurassic Park: The Game, laying in a pool of blood in the lobby of the Visitor Center. It was probably regurgitated by the Tyrannosaurus.

The Indominus rex from Template:Film is similar in behavior to the Big One; having a great deal of problem-solving intelligence, killing mainly for sport and going as far as to kill a member of her own species.

Despite being an animal, the Big One showed a number of unique traits in her behavior that boarder on a primitive personality. She appeared to be sociopathic, even by animal standards. This was evident by the fact that she killed five of her own kind simply to assume dominance, or perhaps to preserve her own existence. The two Raptors she kept alive were likely the weakest members of the pack, and therefore no real threat to her survival or her authority.

She seemed to harbor a significant hatred towards humans, seeing them as a threat and therefore engaging them with extreme hostility. She may have perceived Robert Muldoon as her archenemy, or more accurately as the biggest threat to her existence, as she singled him out during her paddock transfer. It was possible that her efforts were more to exterminate humans rather than hunt them, as she killed Muldoon and then persisted in chasing after the other humans, despite the obstacles set to deter her.

While a seemingly ruthless leader, the Big One did genuinely seem to care about her pack mates. This behavior was likely a strong pack mentality she shared with her fellow kind; however, she was incapable of showing affection and loyalty. The Big One also appeared to be the most intelligent member of her pack, as she ordered her spared subordinates to attack the electrical fences when they were disengaged.

Jurassicpark8.jpg
The Big One's eye.
BigOneLegoincage.png
The Big One inside her cage in LEGO Jurassic World.
Jurassic Park raptors.jpg 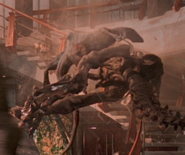 The end of the Big One.
Tossingraptor.jpg
Rexy tossing the Big One.
Rexyfinishbigone.png
Rexy about to finish the Big One off.
Add a photo to this gallery

Retrieved from "https://villains.fandom.com/wiki/User_blog:Love_Robin/The_Big_One_(Jurassic_Park)?oldid=1861731"
Community content is available under CC-BY-SA unless otherwise noted.