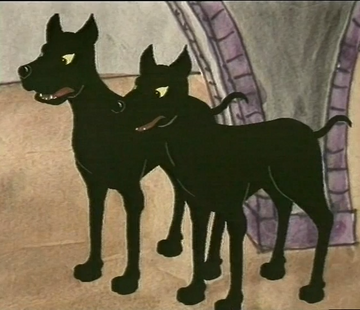 New proposal. Please read this one carefully and come to your own conclusions later.

The Dalmations is a 1997 mockbuster made by Dingo Pictures. It later had a sequel called Dalmatians 2

Who are the candidates? What have they done?

Castor and Pollux are the main antagonists of the movies

In the first movie, Castor and Pollux first appear when they stop the protagonists, Timmy and Toby and make them show them their tongues. They then take them to the cannery factory where they will force them to stick labels on cans.

Pollux is then seen where he is in the cannery where he watches the puppies stick the labels on the cans. When Pollux notices the workers are getting slower, he tells them to get faster, a puppy worker then tells him that she is thirsty, Pollux responds by saying it seems that her last beating wasn’t enough for her, in which the puppy says to not do it, as she is still hurt from last time. Pollux then tells them to carry on.

Castor is then seen sleeping in the cannery, when Butcher comes into the cannery and smells the sausages. Castor wakes up and tells him to not dare eat the bag and it's not for them. After Butch asks questions, Castor tells them that if Pollux thinks the workers aren’t fast enough, he will beat their paw.

When two of the protagonists show up to the cannery, Pollux tells them to scram. Krummel questions him on how he treats his customers and that they would like a tour of the cannery. Pollux then complies for pragmatic reasons. While giving the tour, Pollux notices that puppies were working slower than usual, Pollux then tells them to work faster and tells them "Do I need to beat you again?"

Later on, when one of the puppies sneak into the factory and gets caught, Pollux tells him that he is what they need and that Timmy and Toby don’t look like they’ll last much longer and makes him join the others. They then later catch Butcher when he tries to save the puppies.

Castor and Pollux then later chase the protagonists when they break into the factory to save Timmy and Toby from them. They then get a net on them from the alarm system for their efforts and are presumably arrested later.

In the second movie, they don’t do much of note but in a nutshell they basically return as wardens of the dog pound and abuse the dogs and puppies there such as locking them in cages. They also insulted the protagonists of the previous movies in front of their kids by saying that they were very good at licking. Aside from that though, they just act like big bullies in this movie.

Now, the thing that made me hold off on proposing them for a while was that I thought they suffered from off-screen villainy, given their beatings of the puppies aren’t shown. However, given there is evidence they have been doing this, given that one of the puppies begs them not to be him given he was still hurt from last time. Combined with the fact that the beatings are brought up several times, characters saying that the puppies are suffering and their whole child slavery thing is central to the plot and I’d say it’s just enough for them to pass.

For the in-story standards, they are basically the only villains, so they pass.

As for the general standards, they may not look like much on paper but let’s see what they have: They are child slavers that kidnap puppies and force them to work in the cannery and beats them if they do as much as complain or want water, and enslaves and beats them until they die (If Pollux’s “don’t look like they’ll last much longer” line is any indication). Yeah, I’d say they pass.