With 15 seasons, Criminal Minds holds many potential candidates for pure evil, and we will get to those in due time. But now, let's tackle one that's already under the category, but has yet to be approved. Ladies and gentleman, I introduce you to one of Criminal Minds' first Pure Evils.

What is the Work?

Criminal Minds is a 2005 crime-drama TV series that ran for 15 seasons. The show revolves around a team of criminal profilers and their attempts to profile, track down, and stop or catch various criminals from around the world; mainly serial killers, but also rapists, traffickers, kidnappers, pedophiles, bank robbers, arsonists, cult leaders, etc. Normally, criminals are one-shot bad guys, but occasionally we get two-part episodes, or reoccurring villains like The Reaper and Mr. Scratch. Our candidate today, is a one-shot from Season 1.

Jackson Gordon Cally is the main antagonist of the Season 1 episode "The Tribe." He is a manipulative and xenophobic cult leader that operates in Terra Mesa, New Mexico. He came from an abusive home and learned to read people, much like the BAU do. As a teen, he was arrested for auto theft and imprisoned. While in prison, Cally discovered religion and found this as a new way to manipulate people. When he got out of prison, he studied Native American religion and would eventually use what he knew to form a cult.

What Has He Done

In prison, Cally manipulated an inmate to beat another inmate to death. (I won't hold this one against him, said inmate was threatening Cally, but I will still mention it.) 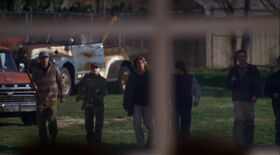 When he got out of prison, Cally started a cult by brainwashing high school students, teaching them what he learned about Native American religion. He preached and taught them about the Gahe and brainwashed them into following his every order. He made them believe that the Americans were trespassers on the Apache land and that the Gahe would want them to kill the trespassers. In 2006, Cally ordered his tribe to attack a college dorm, mimicking Apache war rituals. His tribe tortured and killed five college kids, skinning them alive and even impaling one on a pike while alive. Cally did this to provoke the American Defense Unit, a group of paranoid gun-toting Americans that were xenophobic towards the Apache. However, the attack doesn't provoke the ADU, so Cally sends his tribe to go do the same to the ADU's leader and his family (which includes three little girls). When that doesn't work, Cally decides to try the other side, by dressing his tribe like ADU members and sending them to shoot up a school of Apache children. Luckily, the BAU's leader Hotchner and the reservation police sheriff Blackwolf get to the school in time and apprehend the tribe.

(This happens before the school showdown.) When caught by the BAU, Cally pretends to be all about teaching love, however reveals his true nature to the reservation police sheriff John Blackwolf.

As explained in the quote, Cally is a racist towards the Apache and believes them to be savages. None of what he preaches is what he actually believes and is all a cover for his true nature and motives. His true goal was to start a race war between the whites and the Apache, so he could come out on top and rule over the survivors. (Much like Manson)

This'll be a doozy. As you'd expect from a show that deals with the worst of the worst, Criminal Minds' heinous standards are insanely high. So, bear with me here.

Standards of the episode

Yeah, no problem here. The tribe are a bunch of brainwashed minions who don't have identities and all operate under Cally's orders. Cult Member #6 seems to be the second-in-command, but him giving simple "Split up" and "Find them" orders doesn't suggest to me that he has his own free will. Also, the tribe believe they're doing right by the Apache.

Ingrid Grieson, is the only one of the tribe that has an identity, but she doesn't do anything, and she's brainwashed like the rest.

Ingrid's kidnappers were hired by her father to get her out of the cult. So, yeah, well-intentioned.

The American Defense Unit are slightly xenophobic, but not to Cally's extreme. And like Ingrid, they don't do anything villainous in the episode.

As I've said, CM's heinous standards is bonkers, even the one-shots are pretty nasty, but the way Cally's tribe kills is extremely unique and yet to be replicated on the show. The closest thing to skinning we got is Max Poole, Sebastian Hurst, and Everett Lynch. But both Hurst and Lynch did the skinning after killing the victims. They didn't skin them while alive, nor skinned them fully. Poole raped and cut the face off his one victim, but he was a nothing character, even more than Cally. Also, the fact that Cally ordered his tribe to torture and skin Roy Minton and his family, despite said family having three little girls, topping it off with ordering his tribe to shoot up a school of Apache children. It is for these reasons, that I believe he stands out.

As for comparisons to the already Approved Pure Evils; The Reaper, Carl Buford, and Mr. Scratch are all reoccurring antagonists who had more screen time and had more personal impacts on the BAU. So, comparing them would be unfair.

I'll leave it up to you.