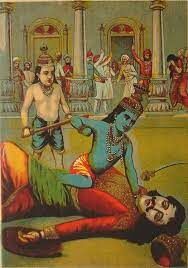 Hi everyone ! Here I am with a new proposal. This one is new for me since it is from mythology instead of movies. Also, I want to thank Accin for providing me information about this character, Hinduism and Hindu mythology.

Since Hindu mythology is clearly modeled from Hinduism, I will make a brief presentation of that religion. Hinduism is a well-known religion and perhaps the oldest still existing. The third largest religion by numbers of practitioners, it has no authors, dogmas or clergy. The majority of Hindus believes in the authority of Veda, a range of sacred texts, considering it as absolute and permanent but several different schools exists like Nyaya who consider Veda as human and non-permanent. A polytheist religion, it is the most practiced religion in India and Nepal. It is also the source of all the Hindu mythology. This universe brings together a large number of stories mainly from Sanskrit literature, in particular the epics of Mahabharata and Ramayana, the Puranas and the Vedas. The character I want to propose, Kansa, originates from this.

The texts of Hindu mythology detail an ancient time when legendary deities, animals and demons lived. They offer a cosmogony beginning with the churning of the sea of milk, and numerous tales of battles, with cycles of creation and dissolution, or Pralaya (another term for dissolution). These texts are interspersed with philosophical and moral discourses. Hindu mythology has many deities, often linked to one or more elements. The trinity, or Trimūrti, consists of the creator god Brahma, the sustaining god Vishnu, and the destructive god Shiva, who influence the fate of mankind.

For those who remember, I also made the proposal for Emperor Kans from the movie Krishna aur Kans who is a animated version of Krishna's story.

Who is the characters/his acts?

Kansa is the son of King Ugrasena and Queen Padmavati, and the half-brother of Devakî. Having overthrown his father (or was about to do it in Baghavatna-Putana), he became king of Mathurâ and married Asti and Prapti, the two daughters of Jarasandha, king of Magadha.

Kamsa learned from a prophecy told by Narada, a god-sage via a celestial voice, that the eighth son of Devakî would kill him: he therefore locked up Devakî and her recent husband Vasudeva, on the express condition that each of their children was given to him from birth. When Ugrasena complained about Devaki’s treatment, Kansa imprisoned him. In Heaven, Earth complained to Brahma about the oppression of demons. Kansa was their leader. So according to Harivasma and Visnu-Purata, it was decided that Visnu would incarnate. To that end, he ordered to place six embryos (demons according to the texts) in Devaki’s belly. He killed the first six, unaware they were demons, but the seventh, Balarâma, is secretly entrusted to Rohinî, one of Vasudeva's wives. When he learns that he has been cheated, Kamsa imprisons the couple. Devakî soon gives birth to a new child, Krishna, and thanks to a miracle which puts Kamsa's soldiers to sleep, Vasudeva manages to escape for a time, goes to the village of Gokula and entrusts Krishna to another of his wives, Yashoda., who exchanges it for one of his daughters, Yoga Mâyâr. In the morning, Kamsa learns of the birth of a new child, seizes Yoga Mâyâ and kills her: she turns into a celestial creature and reminds him of the prediction. Kamsa has all newborn babies killed, but Krishna escapes him. He then sends several demons to fight him, but without success.

Balarama having found him and rejoined him, Krishna produced with his help many miracles to counter the evil spells directed against them by Kamsa. The evil monarch summoned Putana nicknamed the “Infant Killer” to kill the baby. Putana manages to find her and disguises herself into a beautiful woman offering to feed her with milk. Yashoda accepts unaware of the true nature of the woman but when Krishna begins to suckle the breast, she sucks Putana’s life force instead of the poisoned milk. This kills Putana whose breads transform into hills. Later, Kansa, decided to kill Krishna himself sends a messenger, to invite him and his brother Balarama to an archery competition. Krishna accepts, seeing an occasion to get rid of the tyrant and to end the embarrassment Kansa is causing to him.

Arrived to Mathura, Kansa sends two wrestlers to measure themselves with the two brothers and to kill them but they ended up killed by them. Krishna kills Kansa right after that by hitting his foot on his chest.

Like the movie version, Kansa clearly loved his cousin Devaki but when he heard the prophecy made by the god-sage, he lost that redeeming trait by locking her up and later imprisoning her.

According to the Bhâgavata Purâna, Kansa is the reincarnation of a demon who was killed by Vishnu but differents texts tell he is just a tyrannical human so I think this is up to character interpretation.

Pretty sure the heinous standard is extremely high in Hindu mythology but Kamsa stands out as he is just a normal human with less resources. Others villains are demons who kills for power but they are generally dimwitted. Also, some of them actually prayed to more benevolents gods and even became heroes to please them. Kansa on the other hand is intelligent and aware of his actions and did not care at all about the gods, only for more power.

The worst of all the demons (and probably the worst of all the characters in the mythology) is Putana who killed countless infants in the past just for her sadistic pleasure and was about to do the same to Krishna. That said, I think Kansa stands out as like her, he has no redeeming qualities and while his crimes list is less numerous than Putana, he is a human being with less power and resource and he was the one who summoned the demon and ordered her to finish Krishna.