Ushibaroque the Brawl is a bull-themed Gangler Monster who's a member of Raimon Gang and the main antagonist of episode 23 of 2018 TV series called Kaitou Sentai Lupinranger VS Keisatsu Sentai Patranger. Also he's equipped with a Ring-like treasure called La chaleur est là.

He was voiced by Eiji Takemoto.

Ushibaroque the Brawl's face is a grey knight mask with orange cat ears, his hands are red and his orange arms has bull horns, his brown torso has red bullhorns, his chest has a Gangler safe with 2 bison horns and a bull nose at the bottom, his brown and red cowboy boots has white dinosuar bones at the sides, his overall appearance is like a cowboy.

Ushibaroque made his first appearance at the Ganglers Mansion along with his associate Giwi Newzie and his leader Raimon Gaorufang and they were at the dinner table before they're boss arrived.

A while later he'd appeared at a cooking school disguised as Big Mouth Man. However once he'd revealed his Gangler himself he'd captured Tooma and Noel to his hideout.

Speaking of which Ushibaroque's hideout is in fact a ship where he'd battled the thieves. However the rest of Raimon's Gang showed they'd attack the duo, but thankfully Lupin X used the bright light to distract them as he and Tooma makes a get away.

A while later he has a cooking contest with Tooma while Raimon and Giwi are going to be the judge for this contest and the winner of this contest shall be the chef for Ushibaroque to be bossed by him. Once the two are cooking they present their meal to Raimon and Giwi, Ushibaroque present his famous gangler dish to his member and it looks like he was about to win, but Tooma beats him with his dish that he made. But turns out the reason why Ushibaroque learns to cook was for Raimon. So if anyone's meal is better than his is done for.

So with that said he fought Tooma however thanks to Noel for fixing his dial fighter he'd transformed into Lupin Blue and fought the prideful chef with the assist of Lupin X while the rest of the lupin rangers battled Raimon and Giwi. During the fight with Ushibaroque Noel holds him in place while Tooma gained access to his safe (which his password is 7-1-5) and got La chaleur est là (which translate as "The Heat is There") Ring, after that he was taken out.

However thanks to Goche Ru Medou he's been enlarged and battled with X Emperor Slash and Lupin Kaiser after that his horns were taken out by this finisher called X Emperor Gunner Strike and Ushibaroque was then destroyed by X Emperor Slash Strike. 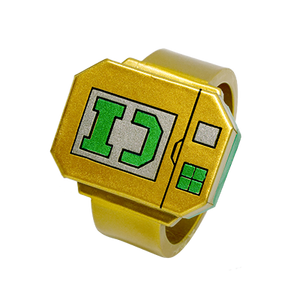