Leader and "Peacemaker" of the 4th Ward (formerly)

Have the "last laugh" by causing chaos.

Regain the fulfilment he felt with Renji in the past (both succeeded).

Uta (In Japanese: ウタ, Uta) is a ghoul and is an old friend of Renji Yomo and Itori. He is the owner of HySy ArtMask Studios and creates masks for ghouls who need them to hide their identity from the C.C.G.. He serves as a supporting protagonist in the manga and anime series Tokyo Ghoul until he is revealed to be a prime member of the Clowns, one of the Bigger Bads of the series. In the sequel series, Tokyo Ghoul:re, Uta becomes one of the secondary antagonists alongside fellow Clown member Donato Porpora.

Uta is a man of rather average height with black hair with an undercut to it. He has dozens of tattoos all over his arms including a tattoo of the sun over his entire left chest region. His kakugan is always active at first glance but in reality, it's actually done through tattooing and ejecting black ink into his eyes. His typical attire consists of a dark grey tangtop and a black overcoat along with it. He also wears harem pants, black sandals, and a black necklace with little white gems hanging from it. He is described by Kaneki of having a scary appearance. Uta's Mask currently is a white mask with four holes and a long nose but he doesn't have a clown mask despite being a member of the group.

When Uta was a teenager, he had lighter colored blonde hair and a headband to keep it back. He wore a big black coat and had glasses, a purple shirt, and a black coat with him as well. His mask at the time was a blank faceless one with a voodoo style look and got him the name No Face by the CCG.

On his neck, there is a tattoo with a Latin quote written in Greek letters that says "I can neither live with you nor without you".

At first glance, Uta has a rather emotionless tone to his voice as his face and expression almost never changes. Uta speaks in a normal tone of voice and is rather friendly when he is first seen. He acts very unexcitable and is left unfazed by practically everything as even if someone dies, he will act as if it never happened. He appears to love anything related to tragedy and will create masks based off of sad ideas from various artists. In his youth, he was sadistic and insane and as he got older, he was able to hide far better than when he was younger. Like all of the other Clowns, he loves chaos and anarchy and was to cause it to have the "last laugh". Despite being psychotic and certifiable, he still has a genuine care for others like Roma.

Uta was born and raised in the 4th Ward to unknown parents. He became rather sadistic and fanatical in his youth and developed a very militaristic and bellicose personality. He was the Leader and "peacemaker" of the ghouls living in the 4th Ward and fought with countless other ghouls. One day, he ran into Renji Yomo and had multiple conflicts with him but after they all settled, the two of them got to know each other and eventually befriended one another. Uta then joined the Clowns once they were created.

Uta makes his first debut where Touka Kirishima and Ken Kaneki are visiting his studio to get Kaneki a brand new mask. He scares Kaneki there and eventually begins measuring his face to create his mask and asks Kaneki about Touka and tells him about the risks of the various wards the ghouls inhabit. After he is finished making Kaneki's mask, Uta dropped it off at Anteiku after Kaneki and Touka were done training and said how he wanted to see Kaneki's left eye so he had the right eye covered up with the eye patch.

When Kaneki is taken to the Helter Skelter, a bar which Itori owns, he is greeted by Itori scaring him with one of Uta's masks and they all sit down for a rather pleasant conversation. Uta is there drinking at the bar while they explain to Kaneki about the underworld, Renji's past, and how thanks to all three of them, the 4th Ward is very dangerous.

After Kaneki got abducted by the Aogiri Tree, Uta appears again as he is part of the team that is sent in to help rescue Kaneki. He then goes with Yomo, Touka, Nishiki, and Shuu Tsukiyama as they all split up and search the base for Kaneki. Later on, Uta, Yomo, and Tsukiyama all run into Noro after he is finished slaughtering a small squadron of CCG Soldiers. All three of them engage in a fight with Noro and eventually, Uta pierces his chest with his bare hands. After witnessing Noro put his head back on, he compliments on how Noro's regeneration is far too strong for regular ghouls. Uta then finds Kaneki and tries to comfort him after what Kaneki had been through.

Uta meets Kaneki one day and informs him on the CCG's Reaper, Kishou Arima, and informs Kaneki of how powerful and strong that he truly is and that he's practically invincible. Uta then confesses to Kaneki small bits about his relationships with both Yomo and Itori. Later on, after the entire Anteiku Cafe was destroyed and its remains savaged, Uta is seen celebrating along with the other Clown Members.

After the three year timeskip, Uta remains alive and well and is still quite active. He is seen at the Auction for the first time in Tokyo Ghoul: re where he is auctioning off people to many rich and powerful ghouls. He eventually brings up Tooru Mutsuki and bids her at 1 Million but then notices an unusual stench. He then rips off Mutuski's eye patch to reveal her true face and announces that he is selling off a rare One-Eyed Ghoul and that the price has now been risen to 10 Million. As the crowd goes wild with endless bidding, Uta whispers into Mutuski's ear that the operation had failed and that no one is coming to save her and offers up another beautiful woman for the highest winning bid of 200 Million. The woman, however, reveals herself to actually be Juuzou Suzuya as he rips off his disguise and stabs Uta multiple times in the face before he begins to slaughter everyone in the crowd and the CCG Forces begin to break in and slaughter everyone. Uta soon revives, however, and does battle with investigator Take Hirako and his squad, whom he easily evades and attacks with knives. Uta attempts to mock Hirako by morphing his face into that of Arima's. Hirako is not faced, however, and slices Uta's face, but it regenerates quickly and he defeats the investigator. He later overhears Sasaki's tortured screams over the building's intercom after it was accidentally activated and listens on in fascination, before leaving with fellow clown Roma Hoito.

A month after the event, Uta goes and visits with Touka and Renji Yomo in their new cafe, conversing with them about Kaneki. There, he was asked about what the Clown's plan was with Kaneki, responding with apparent cluelessness, stating that he doesn't know anything about that, before leaving.

Uta sent a mask and a novel to Sasaki through the mail. Later, Sasaki and his Quinx squad visit Uta in his workshop, where he denies sending it to Sasaki himself, noting that the address may have gotten mixed up. However, he allowed Sasaki to keep the mask and offered to make masks for the rest of the squad so they may pose as ghouls.

During the third raid on the maximum ghoul prison Cochlea, Uta helped Donato Porpora take down the warden before handing Donato a Clown mask, referring to him as 'Crown'. Uta and Donato later observed the murder of Tsuneyoshi Washuu in his office at the CCG by Kichimura Washuu. The two Clowns soon follow his lead. 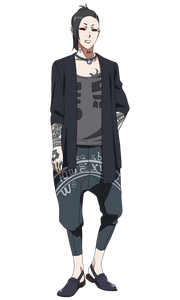 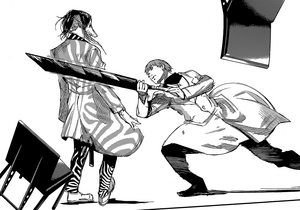 Hirako vs Uta at the Auction Raid 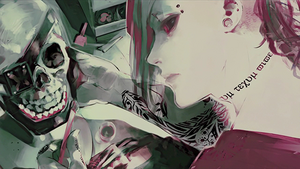 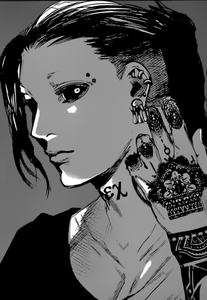 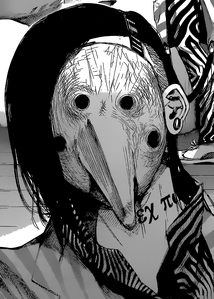 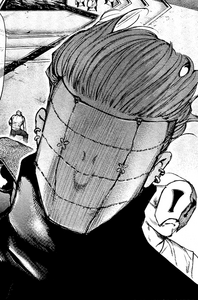 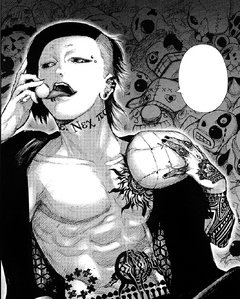 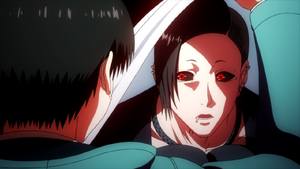 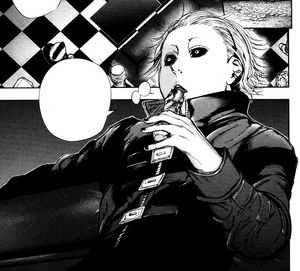 Uta when he was young. 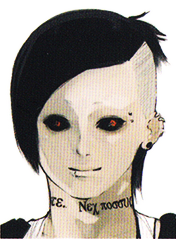 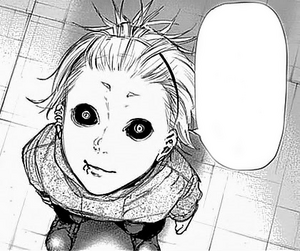 Uta during his youth. 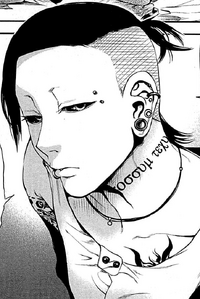 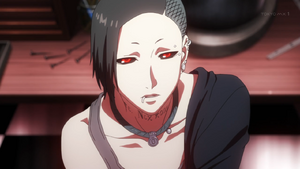 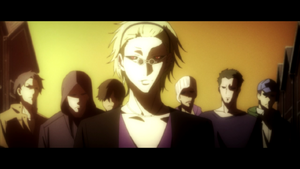 Uta meeting Yomo when he was younger. 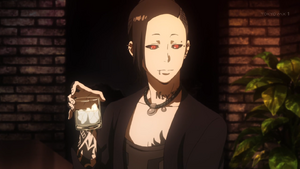 Uta at a bar with Kaneki. 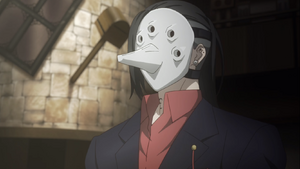 Uta as the auctioneer in the :re anime.

Uta in the Unravel opening