Get revenge on his people, destroy the Turtles and their allies, take over the Utrom homeworld, destroy the multiverse

The Utrom Shredder is actually an alien named Ch’rell and the main antagonist of the 2003 Teenage Mutant Ninja Turtles cartoon series.

Ch’rell was a sociopathic member of an alien race named the Utrom and went from planet to planet, unleashing war and destruction. Finally he was captured by the other Utroms, but after being taken into custody, he escaped and caused the transport to crash on Earth in 11th century Japan. After the Utroms managed to create exo-suits so they could blend in with humans, Ch’rell stole one. He became an incarnation of the Shredder, inspired by the legends he’d heard about the Tengu Shredder. Ch’rell proceeded to form the Foot Clan to aid his plans and also created the Sword of Tengu, but he lost it at some time in the past.

At some point in modern times, the Shredder adopted and trained an orphan named Karai, to whom he left the duty of watching over the Foot Clan’s Japanese branch. He went to New York, where Shredder established himself as Oroku Saki, a billionaire businessman and took over the criminal underworld. One of the only people that could oppose Shredder was Hamato Yoshi, who worked for the Utroms but refused to give up their location, and was killed.

First Battle with the Turtles

As the years went by, Shredder continued to rule New York’s underworld until the Ninja Turtles stopped a group of Purple Dragons who tried to steal an armored car full of money. Next they stopped Baxter Stockman’s Mousers from robbing banks in New York. Finally Shredder managed to retrieve the Sword of Tengu, along with one of the Utrom’s exo-suits, so he knew they were still around.

But then the Turtles got their hands on it and Shredder decided he had to get rid of them, assigning Hun and Stockman to find some way to deal with them. Hun managed to capture Raphael, then let him go so Stockman’s Foot Tech Ninjas could follow him. The plan failed, but from what Hun did find out from Raphael, Shredder learned the Turtles did not know about the Utrom, so they could be of use to him.

He invited Leonardo to his home as Oroku Saki, telling him that there was a great evil that his Foot Clan fought and that they should join forces to stop it. However Splinter told Leonardo and the other Turtles what Oroku Saki really was and they went to confront him. After they refused to join Shredder, a fight started and though they managed to fight off his Foot Ninjas and Hun, Shredder was able to send them running.

Splinter managed to help them regroup and they faced the Foot Clan again, but Shredder took them down one by one. However Splinter tricked him into cutting the support for a water tower, which was then kicked onto him. The water swept Shredder off the building, before the water tower itself fell on him.

Thinking they’d heard the last of him, the Ninja Turtles left with Splinter, but Shredder was far from done. However immediately afterwards, Leonardo, who’d accidentally ended up in the past, came across Shredder, but beat him. Shredder and the Foot Clan followed Leonardo through time portals, ending up on Sh'Okanabo's space ship. They tried to take the technology, but with Sh’Okanabo and the Turtles to deal with, Shredder and his Foot Clan were defeated, ending up in their normal time.

Months later, Leonardo was attacked and almost beaten to death by the Foot Clan, along with Shredder who snapped his swords in half. After tossing Leonardo through the window of April’s Second Time Around shop, Shredder led the Foot Clan to attack it. Eventually, the Turtles, along with Casey and April were forced into a walk-in freezer (since the store used to be a supermarket). As the police showed up, Shredder barred the door, cut a gas pipe, and dropped a fire bomb, which caused a explosion. However the Turtles, Splinter, Casey, and April escaped the explosion, retreating to a farmhouse in North Hampton that belonged to Casey's grandmother.

They returned to New York, before storming the Foot Clan’s headquarters and fought their way through the Foot Ninjas, Hun, mutated Shredder clones, and Foot Mystics.

The Turtles finally reached Shredder’s location, where they faced the Foot Elite, before Stockman appeared, now in cyborg armor that he’d reverse engineered from the Utrom exo-suit Shredder let him study. Shredder and the Turtles were forced to team up to fight him and after he was defeated, they took the fight out to the balcony of the building.

It ended with Shredder being beheaded, but after the Ninja Turtles left, he just picked up his head and walked away. After the battle, Splinter was missing and the Turtles found him at the T.C.R.I. building, but Shredder was following them. He sent Stockman into the building to tamper with the VR technology that the Utroms were using to show the Turtles their history. This forced them to fight a feudal version of Shredder and the Foot Clan, but they managed to get back to reality.

Shredder faced the Turtles and Splinter again, but Stockman turned on him, though Shredder set a timebomb to blow up the T.C.R.I. building. However his exo-suit became so damaged that Shredder was forced to reveal himself as Ch’rell by abandoning his suit. Though the Turtles and Utrom escaped the bomb, the explosion went off before Shredder could get to the Transmat to get away.

With his supposed demise, the mob, the Purple Dragon, and the Foot, under the leadership of the Foot Elite, began a power struggle. Karai and the Foot, with help from the Turtles in exchange for a truce, managed to get back control of the city. However it turned out that Shredder had survived and was placed in a capsule of worms to heal him while Karai watched over him. But after being revived, Shredder’s first order of business was to have revenge on the Turtles. He found out that Hun had reduced Stockman to nothing more than a brain and recruited them again.

At that point, Stockman had created the Foot Mechs, mainly in the form of armored ninja robots, but also versions of the U.S. President, English Prime Minister, and Splinter. However Shredder lost again to the Turtles with help from the Triceraton, Zog, as well as the fact that Karai was questioning her loyalty. Shredder was defeated after Zog gave his life to keep him on his freighter when it exploded, but Karai rescued him on a helicopter. Soon afterwards, the Triceratons launched an invasion of Earth and Shredder used it to gain favor in the city. He did so through his Oroku Saki persona by paying to restore the city.

Shredder would also make changes to the Foot Clan such as Karai being his new second in command, above Hun, and Dr. Chaplin getting hired as a replacement for Stockman. However while Shredder was involved in the city’s politics, at the same time he was working on a spaceship in the hopes he could destroy the Utrom, as well as other planets. With his ship finished, Shredder left Karai in control of the Foot Clan, but Splinter, the Ninja Turtles, Leatherhead, and Agent Bishop interfered. During that battle, Hun discovered that Shredder was really an Utrom after his exo-suit was damaged again.

Despite numerous complications, including Baxter sabotaging his ship and an attack by Agent Bishop and his men, Shredder managed to get onboard the ship with Karai and Chaplin.

As he entered a final battle with the Turtles, he used a more powerful exo-suit, easily defeating both them and Splinter. However Shredder was forced to fall back after Bishop started firing on his ship and the Turtles decided to use their last resort. They used the Fugitoid Program to overload the ship’s core, which would destroy everything including themselves, so as to stop Shredder. However the Utrom stopped the explosion using time stasis and put Ch’rell on trial for his actions.

As punishment for all the chaos and destruction he’d wrought throughout the universe, he was banished to the ice planet, Mor’Tal, to freeze to death. With Shredder gone, Hun would turn the Purple Dragon into an organized crime syndicate and Karai would take over the Foot Clan as the new Shredder with Chaplin at her side.

At one point, Donatello visited an alternate future where Shredder successfully took over the world. Splinter and Casey Jones were already dead, Michelangelo had lost an arm, Raphael an eye, and Hun was in a wheelchair with Stockman’s brain sewn into his shoulder and helping the Turtles. In a final showdown with Shredder, all the future Turtles, Hun, Stockman, and Karai were killed and Donatello faced off against Shredder himself in a powerful new exo-suit. He easily beat Donatello, but was killed after the Turtle shoved the turtle Tunneler into his face. However Donatello went back to the past, preventing that future from occurring.

After the Shredder from the universe of the 1987 TMNT show ended up in that of the 2003 show, he began looking for his counterpart. He eventually located Ch’rell, frozen and teleported him to the Technodrome, where he revived the Utrom. However it didn’t work out as the 1988 Shredder had hoped, since the Utrom Shredder proceeded to take de facto control of the Technodrome with help from Karai. He used technology from Krang’s body to construct a more powerful exo-suit for himself and upgraded the Technodrome with Utrom technology.

Utrom Shredder also created more advanced versions of the Foot Soldiers, as well as an army of mutants from his human soldiers. He proceeded to view all other dimensions using the Technodrome’s dimensional portal, but what he saw shook him. Utrom Shredder saw that there were Ninja Turtles in every dimension and resolved to destroy each version. He used the Technodrome to attack New York along with his army of advanced Foot Soldiers and mutants. When the 1988 turtles and 2003 Turtles confronted Utrom Shredder, he managed to capture them and revealed his full plan.

After meeting and joining forces with their comic book incarnations, they went to deal with Utrom Shredder in Technodrome as he continued destroying the dimension. The comic Turtles managed to taunt Utrom Shredder into coming out to face them, but he soon found himself confronted by three teams of Turtles, 1988 Shredder, Krang, 2003 Splinter, along with Karai, who’d realized his actions would destroy them all.

However Utrom Shredder grew his exo-suit to giant size and proceeded to overwhelm them all with his suit’s new technology. He eventually had the original Turtles in his grasp, almost crushing them to death, but failed to finish them. Utrom Shredder was forced into the laser of the Technodrome, apparently destroying him, all because Bebop and Rocksteady unplugged than replugged in the laser (which was apparently powered by a power outlet). However Splinter remarked that he was seldom gone for long and Karai agreed that he shall return.

On his own, Ch’rell isn’t the most dangerous enemy, given his small size and body design. However he has demonstrated great craftiness, speed, and strength, successfully knocking around his 1987 counterpart and Krang.

When Ch'rell is in his exo-suit as the Shredder, he has demonstrated great skill at martial arts, out-fighting all of the Turtles and his primary weapon is the claws on his armored hand. Shredder is extremely technologically knowledgeable due to being an Utrom and has numerous forms of advanced technology at his disposable.

Aside from his usual exo-suit Shredder has used a few other versions that are more powerful, such as the one he made based on Krang’s suit. This version can grow to giant size and has a number of weapons built into the hands. 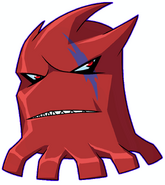 Retrieved from "https://villains.fandom.com/wiki/Utrom_Shredder?oldid=956785"
Community content is available under CC-BY-SA unless otherwise noted.