Guardian of Monomon the Teacher

Attacking those who threaten Monomon's rest.

Kill the Knight and Quirrel (failed).

Uumuu is a minor antagonist and boss in Hollow Knight. It is a large jellyfish-like creature that dominates the Teacher's Archive in Fog Canyon after Monomon the Teacher went into a permanent rest to seal off the Infection as one of the Dreamers.

While little is known about Uumuu's origin, it was created along with the rest of the jellyfish of Fog Canyon as the guardians of Monomon the Teacher, one of the three Dreamers of Hallownest. When Monomon rested in the Dream World to seal the entrance of the Black Egg to prevent the Hollow Knight's escape, some of the Infection managed to escape, infecting multiple creatures of the fallen kingdom, the jellyfish being no exception. However, Uumuu continued to guard the Teacher's Archive even while infected, attacking everything it considered a threat.

The Knight is sent on a quest to absorb the three Dreamers to open the seal to the Black Egg and become the next possessor of the Infection, and is accompanied by Quirrel at the Teacher's Archive, due to him being Monomon's assistant with amnesia. In the inner chamber of the archive, they are attacked by Uumuu, who has no memory of Quirrel, forcing the duo to take down the beast to reach Monomon.

Uumuu uses two main attacks to attack the Knight, both of which use electricity to charge an attack. The first of which creates small bursts of lightning all over the arena. The bursts are all randomized, but leave enough room for the Knight to maneuver. The second attack is where it creates bursts directly at where the Knight is standing. The burst trail continuously follows the Knight's movement, so constant movement is necessary to avoid getting hit.

Under its membrane, Uumuu cannot be damaged, as the Nail will simply bounce off the membrane when hit. Only Quirrel can pop the membrane, leaving the core exposed for a few seconds before the membrane reflates itself.

Uumuu has a short health bar and only two attacks, but its attacks are fast and tricky to dodge since there is not much room to safely focus on recovering lost health. Due to its erratic movements and sparse opportunities to hit it, the fight with Uumuu can become very drawn-out. 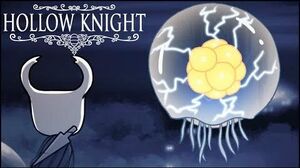 Retrieved from "https://villains.fandom.com/wiki/Uumuu?oldid=3768209"
Community content is available under CC-BY-SA unless otherwise noted.