To commit crimes to gain fortune.

The organization began after Mayhem who had helped invent the masks and high tech vehicles, betrayed Matt Trakker and his brother Andy and stole half of them for his own sinister schemes. He then recruited powerful criminals from around the world as agents, each one with a mask and a transforming vehicle.

With Mayhem leading this deadly team, they did many terrible things including stealing treasures, ransoms and worldwide incidents, but the only thing that stood in their way was Matt Trakker and his organization M.A.S.K. (Mobile Armored Strike Kommand) who always foiled their evil schemes.

Sometimes though their failures came from the incompetence of their own agents resulting in Mayhem screaming abuse at them. 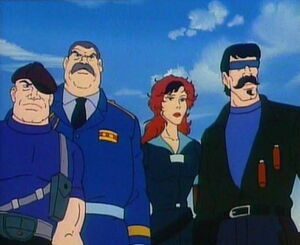 Mayhem with three of his agents: Rax, Dagger and Warfield.
Community content is available under CC-BY-SA unless otherwise noted.